Back to the '80s, Courtesy of the Wage Growth Tracker

Things have been a wee bit quiet in macroblog land the last few weeks, chiefly because our time has been devoted to two exciting new projects. The first is a refresh of our labor force dynamics website, which will feature a nifty tool for looking at the main reasons behind changes in labor force participation for different age groups. More on that later.

The other project has been adding more history to our Wage Growth Tracker. The tracker's current time series starts in 1997. The chart below shows an extended version of the tracker that starts in 1983. 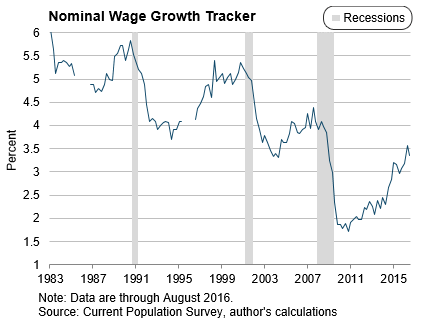 Recall that the Wage Growth Tracker depicts the median of the distribution of 12-month changes of matched nominal hourly earnings. In the extended time series, you'll notice two gaps, which resulted from the U.S. Census Bureau scrambling the identifiers in its Current Population Survey. For those two periods, you'll have to use your imagination and make some inferences.

As we have emphasized previously, the Wage Growth Tracker is not a direct measure of the typical change in overall wage costs because it only looks at (more or less) continuously employed workers. But it should reflect the amount of excess slack in the labor market. This point is illustrated in the following chart, which compares the Wage Growth Tracker with the unemployment gap computed from the Congressional Budget Office's (CBO) estimate of the long-run natural rate of unemployment. 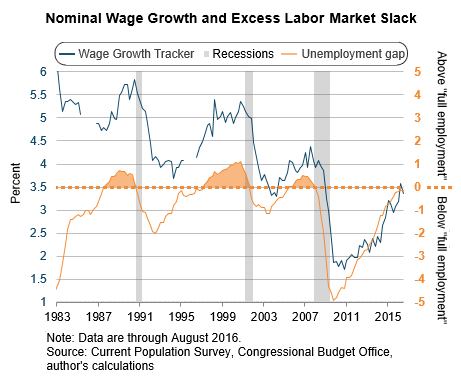 This also is important from a monetary policy perspective if we are worried about the risk of the economy overheating. For example, President Rosengren of the Boston Fed described

why he dissented at the most recent Federal Open Market Committee meeting in favor of a quarter-point increase in the target range for the federal funds rate. His dissent, he said, arose partly from his concern that the economy may overheat and drive unemployment below a level he believes is sustainable.

Currently, the CBO estimate of the unemployment rate gap looks like it is plateauing at close to zero. The fact that the Wage Growth Tracker for the third quarter slowed a bit is consistent with that. But it's only one quarter of data, and so we'll closely monitor the Wage Growth Tracker in the coming months to see what it suggests about the actual unemployment rate gap. We'll discuss what observations we make here.

Got a question... one of the things that I've been thinking about is the likelihood of a sustained period of time where we are at or near "full employment" due to demographic shifts diminishing the labor supply. Based on the chart above, it looks like wage growth continues unabated until employment starts dropping again. What do you think?