When It Rains, It Pours

Seasonally adjusted nonfarm payroll employment increased by only 38,000 jobs in May, according to the initial reading by the U.S. Bureau of Labor Statistics (BLS), and the total increase for the prior two months was revised down by a cumulative 59,000. Although the May increase was depressed by 35,100 striking workers at Verizon Communications, observers widely anticipated this distortion (the strike started April 13). Nonetheless, the median forecast of the May payroll gain from a Bloomberg survey of economists was 160,000, still well above the official estimate. The disappointing employment gain in May, I believe, is statistically related to the downward revisions to the seasonally adjusted gains made over the prior two months.

In contrast to the revision to the seasonally adjusted data, the nonseasonally adjusted level of payroll employment in April was only revised down by 3,000 in the May report. So most of the downward revision to the seasonally adjusted March and April employment gains was the result of revised seasonal factors (the difference between 59,000 and 3,000). In the chart below, the green diamond (toward the left) is the downward revision of 56,000 that resulted from the revised seasonal factors plotted against the Bloomberg survey forecast error for May (the difference between the actual estimate of 38,000 and the forecast of 160,000). The other diamonds represent corresponding points for reports from January 2006 through April 2016. The data points indicate a clear positive relationship and—based on the May Bloomberg forecast error—a simple linear regression would have almost exactly predicted the total downward revision to the March and April employment gains coming from revised seasonal factors. 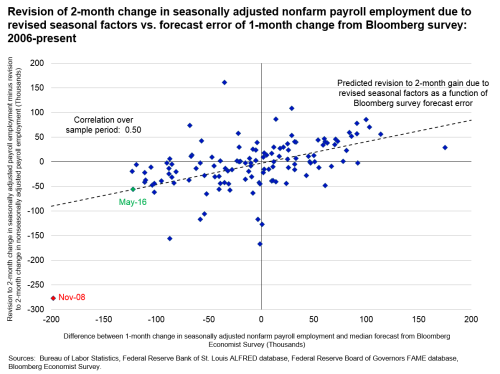 To gain some insight into the positive relationship in the above chart, I used a model to seasonally adjust the last 10 years of nonfarm payroll employment data (excluding decennial census workers). Note that although I followed the BLS's procedure of accounting for whether there are four or five weeks between consecutive payroll surveys, I did not seasonally adjust the detailed industry employment data and sum them up, as the BLS does.

By Pat Higgins, an associate policy adviser in the Atlanta Fed's research department