The April pop in the Atlanta Fed's Wage Growth Tracker has attracted some attention in recent weeks, resulting in some interesting analysis. What is the tracker telling us about the tightness of the labor market and the risks to the inflation outlook?

We had earlier noted the strong correlation between the Wage Growth Tracker and the unemployment rate. Tim Duy took the correlation a step further and estimated a wage Phillips curve. Here's what he found: 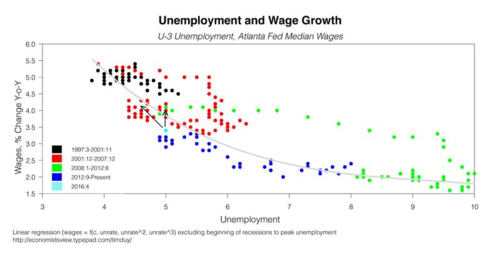 However, I don't think the absence of a wage-push inflation connection using the Wage Growth Tracker is really that surprising. The Wage Growth Tracker better captures the wage dynamics associated with improving labor market conditions than rising labor cost pressures per se. For example, if firms are replacing departing workers with relatively low-wage hires, then the wages of incumbent workers could rise faster than do total wage costs (as this analysis by our colleagues at the San Francisco Fed shows). That said, as Bernstein also pointed out in the Washington Post, it's also pretty hard to find evidence of wage pass-through pushing up inflation in his model using more direct measures of labor costs.

I look forward to seeing more commentary about Atlanta Fed tools like the Wage Growth Tracker and how they can be part of the broader discussion of economic policy.