« Which Wage Growth Measure Best Indicates Slack in the Labor Market? | Main | Putting the MetLife Decision into an Economic Context »

The Rise of Shadow Banking in China

China's banking system has suffered significant losses over the past two years, which has raised concerns about the health of China's financial industry. Such losses are perhaps not all that surprising. Commercial banks have been increasing their risk-taking activities in the form of shadow lending. See, for example, here, here, and here for some discussion of the evolution of China's shadow banking system.

The increase in risk taking by banks has occurred despite a rapid decline in money growth since 2009 and the People's Bank of China's efforts to limit credit expansions to real estate and other industries that appear to be over capacity.

One area of expanded activity has been investment in asset-backed "securities" by China's large non-state banks. This investment has created potentially significant risks to the balance sheets of these institutions (see the charts below). Using the micro-transaction-based data on shadow entrusted loans, Chen, Ren, and Zha (2016) have provided theoretical and empirical insights into this important issue (see also this Vox article that summarizes the paper).

Recent regulatory reforms in China have taken a positive step to try to limit such risk-taking behavior, although the success of these efforts remains to be seen. An even more challenging task lies ahead for designing a comprehensive and sustainable macroprudential framework to support the healthy functioning of China's traditional and shadow banking industries. 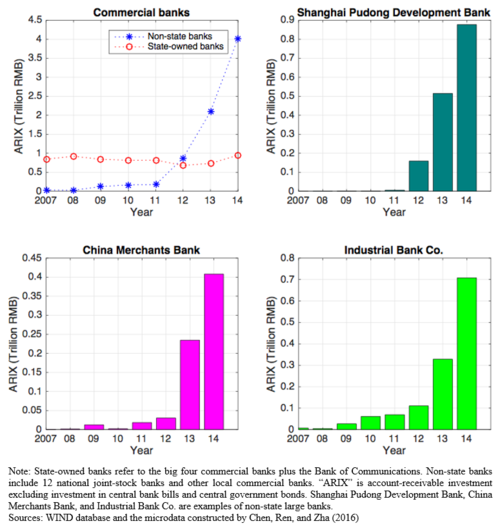