Is the Number of Stay-at-Home Dads Going Up or Down?

A recent Wall Street Journal post observed that most of the recession's "stay-at-home dads" are going back to work. Specifically, data from the U.S. Labor Department shows that the share of married men with children under 18 who are not employed (but their spouse is) rose during the recession and has since given back much of that increase, as the Journal's chart below indicates. 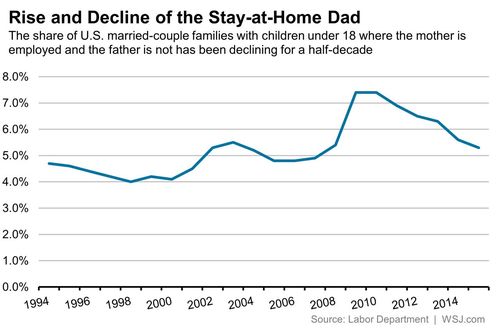 Of course, being a stay-at-home dad in the sense defined in the previous chart (that is, not employed) can be either involuntary because of unemployment, or it can be the result of a voluntary decision to not be in the workforce. Most of the variation in the previous chart is cyclical, suggesting that it is related to the rise and fall in unemployment. But it also looks like the share of stay-at-home dads is higher now than it was a decade or so ago. So perhaps there is also an increasing trend in the propensity to voluntarily be a stay-at-home dad.

To explore this possibility, the next chart shows the annual average share of married men ages 25–54 who have children and who say the main reason they do not currently want a job is because of family or household responsibilities. (This reason doesn't necessarily imply that they are looking after children, but it is likely to be the leading reason.) The fraction is very small—about 1.3 percent in 2015, or 285,000 men—but the share has more than doubled during the last 15 years and would account for about half of the elevated level of the stay-at-home rate in 2015 relative to 2000. 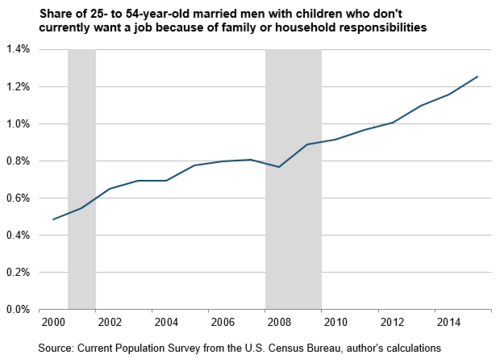 So although large numbers of unemployed stay-at-home dads have been going back to work, it also appears that there's a small but growing group of men who are choosing to take on household and family responsibilities instead.

what happens if we actually model this explicitly? Using controls for cyclical effects? My concern is that you are assuming that the most recent point on the chart is some kind of long run point. Not that I have substantial evidence to the contrary, but it appears to me the trend may well continue