Are Paychecks Picking Up the Pace?

From the minutes of the January 26–27 meeting of the Federal Open Market Committee, it's clear that many participants saw tightening labor market conditions during 2015:

In their comments on labor market conditions, participants cited strong employment gains, low levels of unemployment in their Districts, reports of shortages of workers in various industries, or firming in wage increases.

Based on the Atlanta Fed's Wage Growth Tracker (WGT), the median annual growth in hourly wage and salary earnings of continuously employed workers in 2015 was 3.1 percent—up from 2.5 percent in 2014 and 2.2 percent in 2013. That is, the typical wage growth of workers employed for at least 12 months appears to be trending higher.

However, wage growth by job type varies considerably. For example, the WGT for part-time workers has been unusually low since 2010. The following chart displays the WGT for workers currently employed in part-time and full-time jobs. For those in part-time jobs, the WGT was 1.9 percent in 2015, versus 3.3 percent for those in full-time jobs. The part-time/full-time wage growth gap has closed somewhat in the last couple of years but is still large relative to its size before the Great Recession. Note that full-time WGT is similar to the overall WGT because most workers captured in the WGT data work full-time (81 percent in 2015). 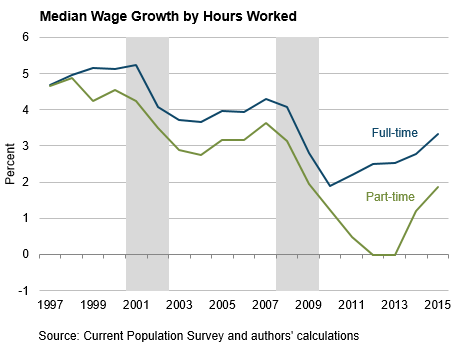 In addition to hours worked, median wage growth also tends to vary across occupation. The following chart plots the WGT for workers in low-skill jobs, versus those in mid- and high-skill jobs. (We define low-skill jobs as those in occupations related to food preparation and serving; building and grounds cleaning; and maintenance, protection, and personal care services.)

The improvement in wage growth for low-skill occupations seems mostly attributable to full-time workers; wage growth for people in low-skill jobs working part-time was about half that (1.6 percent versus 3.0 percent) of those working full-time (see the chart). 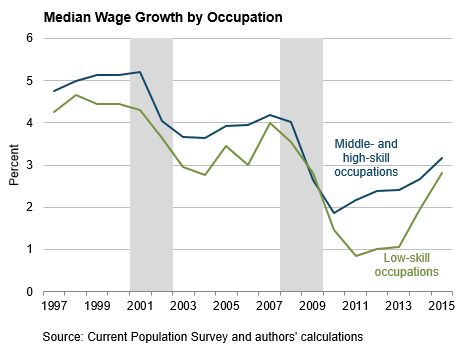 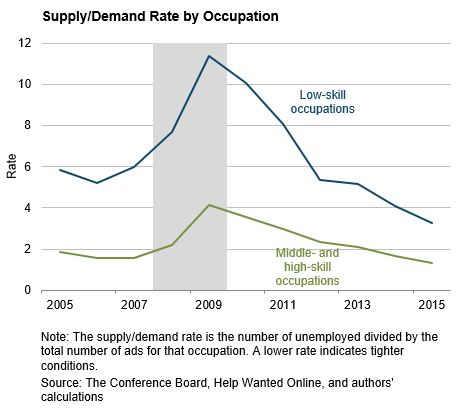 The take-away? Wage growth for continuously employed workers appears to have picked up some steam in 2015, and the recent trend in wage growth is positive across a variety of job characteristics. Wage growth for people in lower-skill jobs has increased during the last couple of years, consistent with evidence of increasing tightness in the market for those types of jobs. The largest discrepancy in wage growth appears to be among part-time workers, whose median gain in hourly wages in 2015 still fell well short of those in full-time jobs.

Whenever someone tries to point to stagnant median wages as evidence of rising inequality over the last few decades , they will quickly be reminded that you need to look at total compensation , not just wages - i.e., to capture the rising costs of health care benefits , etc. , etc.

It seems to me that we should demand the same for studies like the one above. I can easily imagine a situation in which the low-end workers who seem to be gaining in wage growth could simultaneously be losing on the benefits side , resulting in little or no net gain , if not a net loss.