Thinking About Progress in the Labor Market

Today's employment report for the month of February maybe took a bit of drama out of one key question going into the next meeting of the Federal Open Market Committee (FOMC): What will happen to the FOMC's policy language when the economy hits or passes the 6.5 percent unemployment rate threshold for considering policy-rate liftoff? With the unemployment rate for February checking it at 6.7 percent, a breach of the threshold clearly won't have happened when the Committee meets in a little less than two weeks.

I say "maybe took a bit of drama out" because I'm not sure there was much drama left. All you had to do was listen to the Fed talkers yesterday to know that. This is from the highlights summary of a speech yesterday by Charles Plosser, president of the Philadelphia Fed...

President Plosser believes the Federal Open Market Committee has to revamp its current forward guidance regarding the future federal funds rate path because the 6.5 percent unemployment threshold has become irrelevant.

... and this from a Wall Street Journal interview with William Dudley, president of the New York Fed:

Mr. Dudley, in a Wall Street Journal interview, also said the Fed's 6.5% unemployment rate threshold for considering increases in short-term interest rates is "obsolete" and he would advocate scrapping it at the Fed's next meeting March 18–19.

From our shop, Atlanta Fed president Dennis Lockhart echoed those sentiments in a speech at Georgetown University:

Given that measured unemployment is so close to 6.5 percent, the time is approaching for a refreshed explanation of how unemployment or broader employment conditions are to be factored into a liftoff decision.

That statement doesn't mean we in Atlanta are disregarding the unemployment rate altogether. We have for some time been describing the broader net we have cast in fishing for labor market clues. One important aspect of that broader perspective is captured in the so-called U-6 measure of unemployment, about which President Lockhart's speech gives a quick tutorial:

The data used to construct the unemployment rate come from a survey of households conducted by the Census Bureau for the Bureau of Labor Statistics. To be counted as a participant in the labor force, a respondent must give rather specific qualifying answers to questions in the survey...

One measure that counts the marginally attached in the pool of the unemployed is U-6.

U-6 also includes working people who identify themselves as working "part time for economic reasons." These are people who want to work full time (defined as 35 hours or more) but are able only to get fewer than 35 hours of work.

The "shadow labor force" comment is based on these observations. First, in President Lockhart's words:

There is no new story there. The frequency with which people move from marginally attached to in the labor force has been stable for quite a while (see the chart):

The chart below depicts this observation: 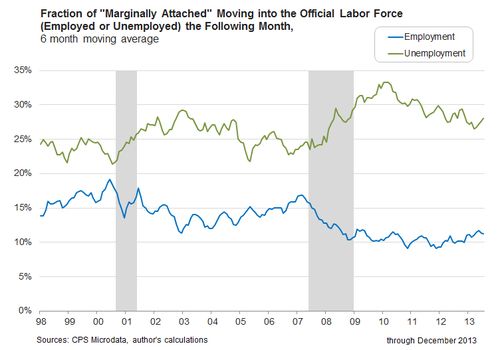 Relative to before the Great Recession, the frequency with which people transitioned from marginally attached to employment has fallen by about 5 percentage points.

That decline is related to this conclusion (again from President Lockhart):

Here's my point: what U-6 captures matters. Measures such as marginally attached and part time for economic reasons became elevated in the recession and have not come down materially. Said differently, broader measures of unemployment like U-6 suggest that a significant level of slack remains in our employment markets.

It is not that we have failed to see progress in the U-6 measure of labor market slack. In fact, since the end of the recession, the U-6 unemployment rate has declined about in tandem with the standard official unemployment rate (designated U-3 by the U.S. Bureau of Labor Statistics; see the chart): 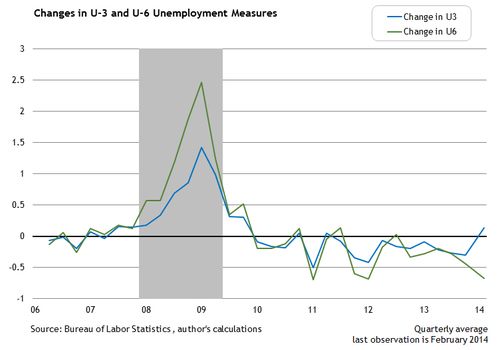 What is the case is that we have failed to undo the outsized run-up in the marginally attached and people working part-time for economic reasons that occurred during the recession (see the chart): 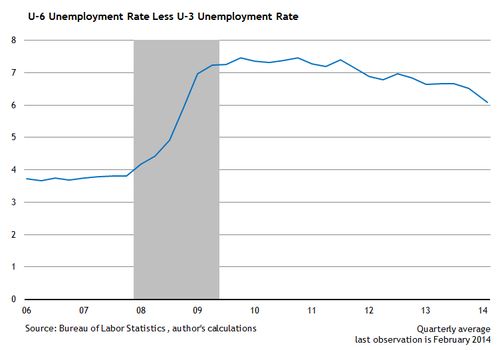 One interpretation of these observations is that the relative increase in U-6 represents structural changes that cannot be fixed by policies aimed at stimulating spending. But we are drawn to the fact, described above, that the marginally attached are flowing into the labor market at the same pace as before the recession, but they are finding jobs at a much slower pace, making us hesitant to fully embrace a structural interpretation.

Or, as our boss said yesterday:

As a policymaker, I am concerned about the unemployed in the official labor force, but I am also concerned about the unemployed in the shadow labor force. To get close to full employment, as I think of it, would involve substantial absorption of this shadow labor force. I do not think we're near that point yet. This is one of the reasons I support continuing with a highly accommodative policy and deferring liftoff for a while longer.

But if you are looking for some good news, here it is: Though the official unemployment rate has been essentially flat for the past three months, the broader U-6 measure that we are monitoring closely has fallen by half a percentage point. More of that, and we will really be getting somewhere.

By Dave Altig, research director and executive vice president at the Atlanta Fed

Listed below are links to blogs that reference Thinking About Progress in the Labor Market :

What do you think of the fact that the Employment Population Ratio plummeted 5 percentage points from 2006/07 by 2010 to 58.2, where it pretty much has sat still?

Hmm, well I just saw an older blog entry, so I'll look at that.