There are at least two sides to every debate, but it’s becoming clearer by the day that the debate over the cost of higher education is being won by people like University of Tennessee law professor Glenn Reynolds.

A frequent writer and lecturer, and even more frequent blogger, Reynolds visited the Atlanta Fed recently to share his views with local community leaders. He reported that total student loan debt now stands at over $1 trillion—more than total credit card debt and auto loan debt combined. As these charts from the New York Fed show, the increase in total student debt over the past eight years is a result of greater numbers of students and families taking on educational debt as well as higher debt balances per student.

One can argue that this trend is not necessarily a bad thing. Education is an investment in human capital, and if those newly acquired skills are valued highly by employers, then going to college can be a positive net present value project, even with debt financing.

And wage data reveal that these skills are indeed valuable. As this Cleveland Fed article and chart show, the median wage for a worker with a bachelor’s degree was about 30 percent higher than that of a worker with only a high school diploma in the late 1970s and grew to more than 60 percent higher by the early 2000s. However, the data also show that over the last decade the value of a college degree measured by wages has stagnated. 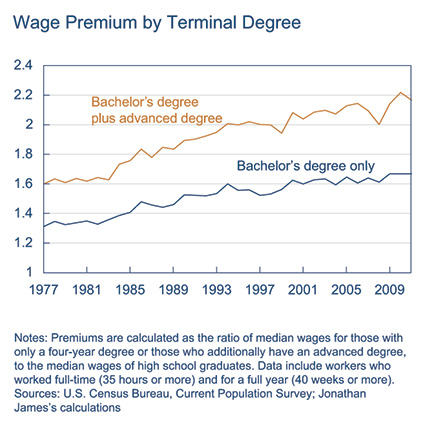 And here begins the crux of Reynolds’s concern. The cost of attending college has continued to grow, and grow rapidly. Between the 2000–01 and 2010–11 academic school years, the cost of undergraduate tuition, room, and board rose 42 percent at public institutions and 31 percent at private not-for-profit institutions, after adjusting for inflation, according to the National Center for Education Statistics.

A stagnant wage premium with rising costs of attendance suggests that, at least on average, the value proposition of going to college is deteriorating. To make matters worse, Reynolds described students graduating with significant levels of student loan debt who often cannot find jobs that pay enough to cover the loan payments. Moreover, unlike credit card debt, student loans are not dischargeable in bankruptcy, meaning that there is no opportunity to get out from under the debt burden other than through full repayment. Reynolds told of individuals whose high levels of student debt are limiting their career choices, ability to obtain mortgages, and save for retirement. He even went on to say that student loans are affecting a much more personal market—the marriage market. After all, he says, “Who wants to marry someone with huge amounts of unpayable debt?”

Reynolds contends that ”something that can’t go on forever, won’t,” and he believes that seeing friends or family members having financial problems because of student loans is leading college students to become more cost conscious. Additionally, he notes that more and more of today’s students are focusing on majors that seem likely to offer a strong salary over time. The chart on 2009 enrollment and wage premiums by major show some support for that notion. 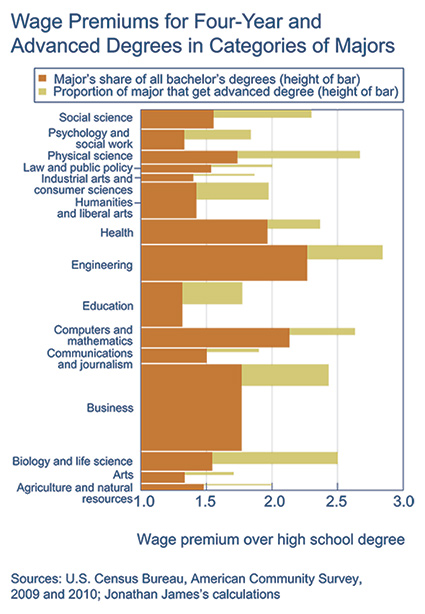 Large fractions of students are enrolled in majors with relatively higher wage premiums, including business and engineering, but there are also substantial enrollments in education, psychology, and the humanities. For Reynolds it is not so much about seeking out the highest-wage major; instead, his advice is, “Don’t go to a college that will require you to borrow a lot of money.”

What’s the endgame? Well, he expects that when the bubble bursts, there will be less “dumb money” to be gained, students will demand a higher return on investment, and schools will ultimately be forced to adapt. According to Reynolds, colleges have two different strategic choices: increase the value of the education for the current cost, or lower the cost of providing the current level of value. And he expects the most common response will be the latter, likely involving technology such as MOOCs (massive open online courses) and other innovations in teaching methods.

When any bubble bursts, there are some casualties. In this case, it may be that some colleges do not survive once market discipline has been unleashed. Given the statistics above, you might think that it would be the small liberal arts colleges that will suffer the most, but in this video, shot during the visit to Atlanta, Reynolds argues that these colleges may actually gain from the coming shakeout.

Reynolds indicated that there is change in the air, but it’s coming slowly. The bubble may not have burst, but he sees it deflating. He noted, “A lot of people hope it will pass. They’ll muddle through without dramatic changes. And frankly I hope they’re right. But I don’t think they are.”

By Paula Tkac, vice president and senior economist in the Atlanta Fed research department and

Listed below are links to blogs that reference Higher Education: A Deflating Bubble? :

A bubble is when people are willing to pay more than fundamental value for an asset because they expect to be able to sell it for still more. This is a weird metaphor to use to describe the problems in higher education.

The problem in higher education is two fold. First, the state and federal governments, which used to be key financing sources, have cut back their funding radically.

Second, universities, now forced to rely on students for more of their funding, have gotten locked into a dangerous competitive game that they believe requires them to expend ever increasing sums on highly visible (and expensive) amenities, including nicer dorms and many more student services.

All this is compounded by the unconscionable changes in student loans. Currently the US profits even from so-called "subsidized" student loans, charging far more than its cost of funds. The high interest rate charged students functions as an excise tax on education. Making these loans non-dischargeable puts increasing numbers of students, especially those who've been scammed by for-profit institutions masquerading as trade schools, into a form of debt peonage that is a disgrace to a civilized country.

The solution, if we are a civilized country, is simple enough. Student loans should be, as they once were, at rates below the US government's borrowing rate, and they should be dischargeable in bankruptcy like any other debt. This alone would cut the cost of higher education dramatically for students who need to borrow.

Then, our governments should shift some of the astonishing resources they have devoted to building prisons and supporting the military-industrial complex to, instead, building our future.

There is no need to turn our state universities into online trade schools -- we could, instead, act like the richest country in the world and fund them adequately.

you point out that "the median wage for a worker with a bachelor’s degree was about 30 percent higher than that of a worker with only a high school diploma in the late 1970s and grew to more than 60 percent higher by the early 2000s"; but there's no counterfactual; it may be that those more intelligent & focused individuals would have commanded the same premium had they not gone to college...

I just did a quick back-of-the-envelope estimate regarding my daughter's college cost at a state university (paying in-state tuition).
It costs her roughly $53 for every hour she sits in a classroom. (Roughly 18K/yr in tuition, housing, etc plus what she could have made on a minimum wage job during that time).

What does the university deliver that is worth her paying that much?

Until universities can answer that question without bumbling, blushing, or bullshitting, they will continue to be at existential risk going forward.