« Will the Next Exit from Monetary Stimulus Really Be Different from the Last? | Main | Being Ahead of the Curve: Not Always a Good Thing »

You Say You’re a Homeowner and Not a Renter? Think Again.

As we’ve said before, we’re suckers for cool charts. The latest that caught our eye is the following one, originally created by the U.S. Bureau of Labor Statistics (BLS). It highlights the relative importance assigned to the various components of the consumer price index (CPI) and shows where increases in the index have come from over the past 12 months. 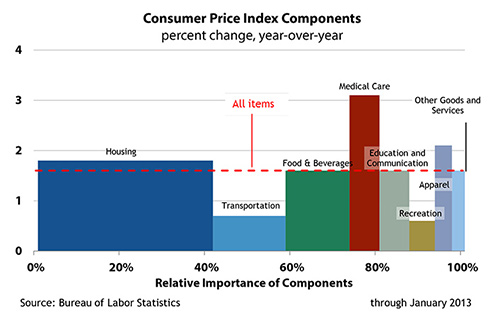 It probably won’t surprise anyone that the drop in gasoline prices (found in the transportation component) exerted downward pressure on the CPI last year, while the cost of medical care pushed the price index higher. What might surprise you is the size of that big, blue square labeled “housing.” Housing accounts for a little more than 40 percent of the CPI market basket and, given its weight, any change in this component significantly affects the overall index.

This begs the question: In light of the recent strength seen in the housing market—and notably the nearly 10 percent rise in home prices over the past 12 months—are housing costs likely to exert more upward pressure on the CPI?

Before we dive into this question, it’s important to understand that home prices do not directly enter into the computation of the CPI (or the personal consumption expenditures [PCE] price index, for that matter). This is because a home is an asset, and an increase in its value does not impose a “cost” on the homeowner. But there is a cost that homeowners face in addition to home maintenance and utilities, and that’s the implied rent they incur by living in their home rather than renting it out. In effect, every homeowner is his or her own tenant, and the rent they forgo each month is called the “owners’ equivalent rent” (or OER) in the CPI. OER represents about 24 percent of the CPI (and about 11 percent of the PCE price index). The CPI captures this OER cost (sensibly, in our view) by measuring the cost of home rentals (details here). So whether the robust rise in home prices will influence the behavior of the CPI this year depends on whether rising home prices influence home rents.

So what is likely to happen to OER given the continued increase in home prices? Well, higher home prices, in time, ought to cause home rents to rise, putting upward pressure on the CPI. Homes are assets to landlords, after all, and landlords (like all investors) require an adequate return on their investments. Let’s call this the “asset market influence” of home prices on home rents. But the rents that landlords charge also compete with homeownership. If renters decide to become homeowners, the rental market loses customers, which should push home rents in the opposite direction of home prices for a time. Let’s call this the “substitution influence” on rent prices.

Consider the following charts, which show three-month home prices and home rents (measured by the CPI’s OER measure). It’s a little hard to see a clear correlation between these two measures. 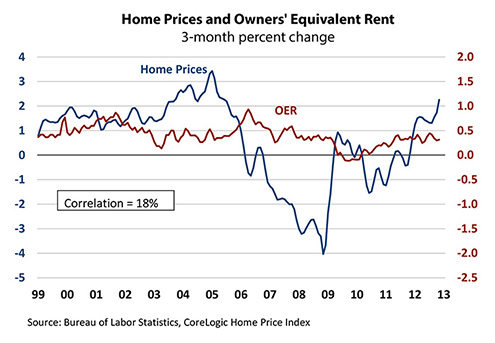 So we’ve separated these data into their trend and cycle components (using Hodrick-Prescott procedures, if you must know) shown in the following two charts. Now, if one takes the trend view, there is a clear positive relationship between home prices and home rents. This is consistent with the asset market influence described above. But also consider the detrended perspective. Here, home prices and home rents are pretty clearly negatively correlated. This, to us, looks like the substitution influence described above. 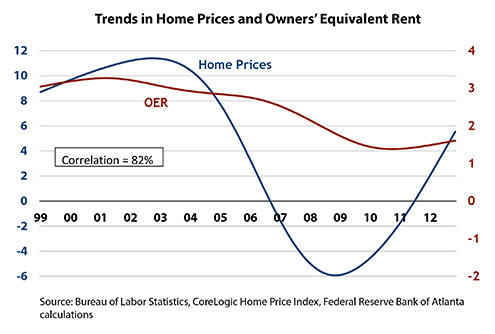 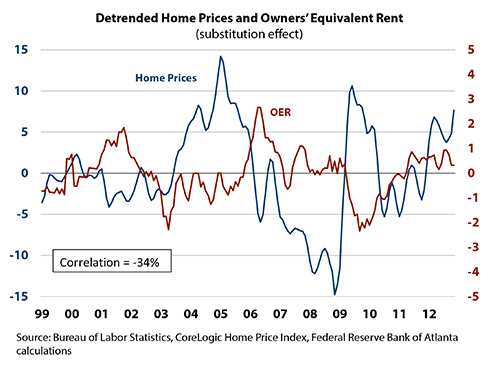 So let’s get back to the question at hand. What do rising home prices mean for OER and, ultimately, the behavior of the CPI? Well, it’s rather hard to say because the link between home prices and OER isn’t particularly strong.

Not definitive enough for you? OK, how about this: We think the recent rise in home prices will more likely lean against the rise in OER for the near term as the growing demand for home ownership provides some competition to the rental market. But, in time, these influences will give way to the asset market fundamentals, and rents are likely to accelerate as returns on real estate investments are reaffirmed.

By Mike Bryan, vice president and senior economist, and

Listed below are links to blogs that reference You Say You’re a Homeowner and Not a Renter? Think Again. :

So, how do the OER and house rental prices line up?

Can't you tell just by eyeballing the data that OER lags by about 18 months behind home prices? Shift the red line back, and see what that does to your correlation!

So, let me see if I get this right: the inflation rate is calculated in part from a mathematical construct representing a cost that no one actually pays, based on surveys asking people what they think their house is worth in rent. (And of course we know that homeowners are not biased in their view of the worth of their house!) I live in Cambridge, which has high rents and low vacancy rates. I'm giving me a pretty good deal on my rent--I should be charging me a lot more! As a practical matter I do regard the difference between my mortgage and what it would cost to rent around here as a kind of savings (thanks, super-low interest rates!). But then, you can also see how, since my mortgage is fixed, I am more concerned with inflation of costs that come directly out of my pocket, such as maintenance and food. Sadly, plumbers don't want to get paid in nontransferable theoretical constructs.

The "correlation" chart is not persuasive.

A simpler hypothesis is that the CPI determination of OER is flawed. One might then be concerned that this bad OER measurement distorts the CPI and could lead to serious macro consequences due to the widespread use of a bad CPI.

And indeed, if one takes time to read how OER is actually determined, one is not heartened. The quote is below. The bottom line is that some owners are SURVEYED and asked their OPINION about what their house WOULD rent for, if they rented it! I am flabbergasted by this, because in my experience owner's responses are horribly biased and not at all reflective of actual rental market conditions. Many owners haven't even looked at renting for years, decades, etc. THERE HAS TO BE A BETTER WAY TO MEASURE 24% of the CPI! (The fact that this isn't being done, despite the weight and importance of this part of CPI, is a significant "tell" that no one actually cares about getting anything factually right in economics...)

From the link given in the article above:

" ' ... Owners’ equivalent rent of primary residence (OER) is based on the following question that the Consumer Expenditure Survey asks of consumers who own their primary residence:
“If someone were to rent your home today, how much do you think it would rent for monthly, unfurnished and without utilities?”

... From the responses to these questions, the CPI estimates the total shelter cost to all consumers living in each index area of the urban United States. ' "

What about Energy Prices (esp. NatGas) and OER. I recall that the relationship was the opposite of what one would expect, that as NatGas prices rose OER actually fell, although I can't recall why.

Got it. Estimated cost of Landlord provided utilities is SUBTRACTED from estimated rental costs to generate OER. So if Electricity (Energy) Costs rise that will put downward pressure on OER.