« Symmetric goals, asymmetric risks | Main | Labor force nonparticipants: So what are they doing? »

A take on labor force participation and the unemployment rate

By now, if you've been paying attention to the coverage following the April employment report, you know the following:

With respect to the first observation, in a previous post my colleague Julie Hotchkiss described how to use our Jobs Calculator to get a ballpark sense of what the unemployment rate would have been had the LFPR not changed. If you follow those procedures and assume that the LFPR had stayed at the March level of 63.8 percent instead of falling to 63.6 percent, the unemployment rate would have risen to 8.4 percent instead of falling to 8.1 percent.

It is clear that interpreting this sort of counterfactual experiment depends critically on how you think about the decline in the LFPR. The aforementioned post at Rortybomb cites two Federal Reserve studies—from the Chicago Fed and the Kansas City Fed—that attempt to disentangle the change in the LFPR that can be explained by trends in the age and composition of the labor force. These changes are presumably permanent and have little to do with questions of whether the labor market is performing up to snuff.

The following chart, which throws our own estimates into the mix, illustrates the evolution of the actual LFPR along with an estimate of the LFPR adjusted for demographic changes: 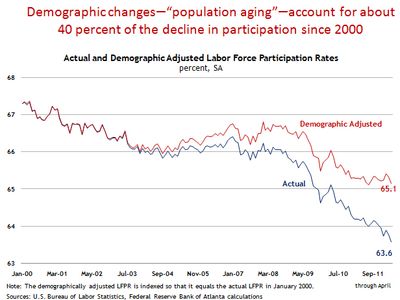 As the header on the chart indicates, our estimates suggest that roughly 40 percent of the change in the LFPR since 2000 can be accounted for by changes in age and composition of the population—in essentially the same range as the Chicago and Kansas City Fed studies. (If you are interested in the technical details you can find a description of the methodology used to generate the chart above, based on work by the University of Chicago's Rob Shimer.

In other words, 0.9 percentage points of the decline in the LFPR since the beginning of the past recession can be explained by demographic trends (as the baby boomers age, the labor force will grow more slowly than the total population [ages 16 and up]). Subtracting the demographic trends still leaves 1.5 percentage points to be explained, a number right in line with Brad DeLong's back-of-the-envelope calculation of "cyclical" LFPR change.

As DeLong's comments make clear, the interpretation of the nondemographic piece of the LFPR change requires, well, interpretation. And the consequences of connecting the dots between changes in the unemployment rate and broader labor market performance are enormous.

In the recently released Summary of Economic Projections following the last meeting of the Federal Reserve's Federal Open Market Committee, the midpoint of the projections for the unemployment rate at the end of 2013 is 7.5 percent. Turning again to our Jobs Calculator, we can get a sense of what sort of job creation over the next 20 months will be required given different values of the LFPR. For these estimates, I consider three alternatives: The LFPR stays at its April level, the LFPR reverts to our current estimate of the demographically adjusted level (that is, increases by 1.5 percentage points), and an intermediate case in which the LFPR increases by 0.7 percentage points—the lower end of DeLong's estimate of "people who really ought to be in the labor force right now, but who are not." 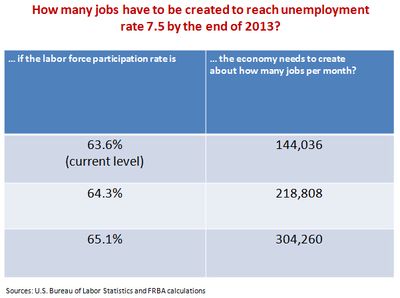 "Are [people who really ought to be in the labor force right now, but who are not] now part of the 'structurally' non-employed who we will never see back at work, barring a high-pressure economy of a kind we see at most once in a generation?"

As you can see, the answer to that question matters a lot to how we should think about progress on the unemployment rate going forward.

By Dave Altig, executive vice president and research director at the Atlanta Fed

Listed below are links to blogs that reference A take on labor force participation and the unemployment rate :

Seeing as there was an event, the Great Financial Crisis, and employment and participation have both trended in the down direction, perhaps we should look at them as aspects of the same thing, a decaying job market. Thus, the jobs calculator is a good thing -- the unemployment rate adjusted to a steady participation rate is a very good metric for gauging the real state of the labor market.

To say that part of the change in participation is due to demographics certainly cannot be proven by the relatively primitive analysis cited from the University of Chicago. In previous times of stagnating wages, for example, participation went up, thinking of the late 1970s into the late 1980s.

The layman's take is that participation is going down because jobs cannot be had and people are making other arrangements, whether taking disability, early retirement, borrowing to go to school, or adapting in another manner. Certainly it is a common perception that if the economy picks up, there will be more people entering the labor force.

I posted this on Mark Thoma's "Economist's View" in response. I thought I'd repeat it here, too.
_________
Something is wrong here.

I perused the linked reports from the Chicago and Kansas City Fed's. The data in both reports show an INCREASE in Labor Force Participation Rate (LFPR) for workers over 55 between 2001 and 2011. Look at Chart 8 in the Kansas City report and Table 4 in the Chicago report. The LFBR increases for older workers.

The Kansas City report even offers a reason for the increase:

"The rise can be explained by longer term developments, such as improving health and longevity, the need to build retirement savings due to the shift away from defined-benefit pensions, and decreased availability of retiree health benefits (Kwok and others)."

But then BOTH reports go on to say that overall LFPR is declining due to older workers LEAVING the workforce. This is directly at odds with the data.

I'm no economist (obviously), but as a layperson, I don't think I'd buy this product.