« Uncertainty about uncertainty | Main | In the interest of precision »

In search of an agenda for job creation

In a macroblog post yesterday, Dave Altig, research director at the Atlanta Fed, discussed some recent research from the Federal Reserve Bank of Cleveland focused on the relationship between uncertainty and job creation by small businesses. That research, which is based on survey responses from members of the National Federation of Independent Businesses (NFIB), found that a high degree of uncertainty was correlated with a scaling back in hiring plans.

I believe that understanding the job creation challenges we currently confront may require that we increasingly turn our attention to the factors restraining the high growth sectors of the economy. Some evidence from this segment of the business universe came from a recent poll of fast-growing firms that the Kauffman Foundation conducted at the Inc. 500/5000 conference in September. This table summarizes the results of that poll, which are juxtaposed with roughly comparable responses from the NFIB survey. 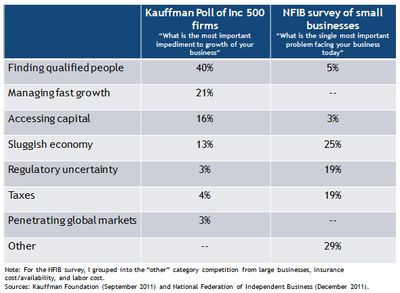 The interesting thing about the Kauffman survey is that the overwhelming problem reported by those companies that are in growth mode is the inability to find qualified workers. That observation is important because it bears on such questions as: To what degree is our elevated unemployment rate structural? How do we explain the observation that the number of unemployed workers appears to be elevated relative to the number of reported job vacancies? and so on.

It is obviously not appropriate to extrapolate from a single snapshot of a sample of fast-growing firms to the U.S. economy as a whole—and that is not the message here. But it is increasingly clear that the search for a single smoking gun that will clarify what is happening in labor markets is likely to be a hopeless quest. The answer to the question asking what a jobs agenda would look like is like your Christmas wish list: one size probably does not fit all.

Note: Today's macroblog post is the last for 2011. Look for macroblog's return in early January.

Listed below are links to blogs that reference In search of an agenda for job creation :

This is why Alex Tabarrok's assertions about immigration reform are so important right now and why we need to pair that with some serious job training programs for the unemployed and ultimately reform our education system.

About a year before the firm I used to work for outsourced several hundred IT jobs to India they fired all their internal IT trainers and cancelled their decades-long IT talent development program.

Why train US workers when you can simply import the workers you need. It's only a little harder now when the "real unemployment rate" (the U6 rate) is at 20%.

To bring in more cheap labor today you also need to hire a PR firm to plant stories about "Structural Unemployment" and phony schemes like these;

As Dean Baker is fond of saying, when firms complain of not being able to "find qualified employees" they leave off the "who are willing to work for the wage we are offering."

There is no STEM worker shortage in the US. The salaries of US-based STEM workers have been stagnant for the past 12 years.

Presumably small businesses that are not well known and have small HR departments find it difficult to find qualified people all the time. The question at issue is: what is different about the present situation, as against before the financial crisis or during previous recoveries?

The best piece of analysis I have seen on this (I forget where) simply charted the NFIB survey responses through time. The response that jumps sharply after 2007 is the state of the economy. That supports the idea that what is unusual about the present situation is the sluggish economy.

It would be interesting to see some analysis on the components of the index in the previous post. It appears to be highly correlated with recessions.

Was being rather lazy -- I had a look at the components. It strikes me that the "policy uncertainty" that the index captures likely arises from events that have a negative or uncertain impact on the economy -- hence the spikes during wars and the upward trend during recessions. If this is the case, then it is not possible to infer that the situation would be better if Republicans and Democrats would just get along.

On the same topic, you reminded me of a piece I wrote a while ago:

I have been thinking a bit more about "confidence," which I talked about yesterday. In the 1980's TV series "The A Team," when a member of the team or the team as a whole was in the mood for intelligent risk-taking it was said that they were "on the jazz." Why is it "confidence" that is lacking in the economy, and not "the jazz?" When one is on the jazz, one enjoys taking calculated risks in the pursuit of an objective, and it strikes me that this is just the kind of attitude that the economy needs -- a bit of entrepreneurial spirit. What is more, unlike the "confidence" analysis, there is empirical support for my jazz theory, inasmuch as growth in the US was stronger in the three decades of macroeconomic volatility before 1980 than in the three decades of stability that followed that year. The jazz, you see, requires real danger, and less danger means less jazz. As B.A. Baracus says to John "Hannibal" Smith on one occasion: "Hannibal, when you're on the jazz, you're dangerous". In the present environment the problem is that, to be on the jazz, one needs to see a reasonable prospect of success in a dangerous situation. Deleveraging, austerity and weak economy have robbed people of this prospect. Thus the prescriptions of the jazz analysis are just those policies that will create enough macroeconomic volatility to bring some success to people (and thus to give everyone the prospect of success and promote a general restoration of the jazz). This means debt- or money-financed fiscal stimulus and further unconventional monetary easing measures.

Of course, neither the "jazz" analysis nor the "confidence" analysis is a good one. My point is that the former is just as compelling as, and has more empirical support than, the latter. But neither is a proper model of how the economy works. I think that the popularity highlights the fact that the most common mode of human reasoning is not deduction or induction, but analogy. The "confidence" theory is appealing because, when a person loses his confidence, he looks depressed -- and the economy looks depressed. What this means is that we have to be careful with the analogies we use. There are reasons to think that we cannot understand the economy intuitively like we understand a person: empirically, this method does not seem to allow people to make good predictions, and other successful theories about the world (such as quantum physics) are not intuitive; and theoretically, mathematicians have given us the theory of complex systems that tells us that the outputs of such systems can be highly counterintuitive.

It really strikes me that the kind of business matters a good deal more than the age of the business for the macroeconomic growth, though I understand that the age of businesses makes for easy-to-come-by data. Jobs programs ought to be aimed at the best growth-contributing businesses.

For example, the age of a dentist's office doesn't matter too much, as there should be a more or less slowly increasing number of offices with the increasing number of teeth, and not a big net growth contributor. Drywall contractors would seem to cycle up and down with booms, but employment-wise not contribute a great deal on average, with productivity possibly even balancing population gains.

My own high-tech widget and gadget firm, on the other hand, ought to be able to grow not only the number of number of our own employees, but the qualitatively new products should help grow other new businesses that otherwise cannot be built without our devices.

The small business innovative research program (SBIR/STTR, sbir.gov) supports exactly this sort of business development, currently employing about 25k people in small firms on 1-to-3 person development projects. Ramp this up by a factor of 100 for 2 to 4 years, which would prime the macroeconomic demand pump while also developing new services and products and while investing in the broader human technical and business capital needed for such efforts. The federal infrastructure to ramp these programs essentially overnight and supervise them already exists.

(And, FWIW, Alex Tabarrok's immigration assertions are nuts. Pay a little more, and I have found you can hardly swing a stick without knocking over a couple of domestic Ph.D. engineers and skilled technical staff.)

i think is also good to know that what makes a business to stand the test of time is not its level of age or size but the good and grounded knowledge of the business, the market field and analsyis of final consumers. Then the sustainability of the business through several means