Global inflation and the Fed: One more time

George Melloan is unhappy with U.S. monetary policy, and he repeats what has become by some a criticism of Federal Reserve policy:

"In accounts of the political unrest sweeping through the Middle East, one factor, inflation, deserves more attention…

"Probably few of the protesters in the streets connect their economic travail to Washington. But central bankers do. They complain, most recently at last week's G-20 meeting in Paris, that the U.S. is exporting inflation…

"About the only one failing to acknowledge a problem seems to be the man most responsible, Federal Reserve Chairman Ben Bernanke. In a recent question-and-answer session at the National Press Club in Washington, the chairman said it was 'unfair' to accuse the Fed of exporting inflation. Other nations, he said, have the same tools the Fed has for controlling inflation.

I would simply repeat my argument from our previous macroblog post, but I don't really have to. Mr. Melloan makes the point for me [with my emphasis added in italics]:

"Consider, for example, that much of world trade, particularly in basic commodities like food grains and oil, is denominated in U.S. dollars. When the Fed floods the world with dollars, the dollar price of commodities goes up, and this affects market prices generally, particularly in poor countries that are heavily import-dependent. Export-dependent nations like China try to maintain exchange-rate stability by inflating their own currencies to buy up dollars."

If the United States unwisely floods the world with dollars, driving down the international value of the dollar, countries with flexible exchange rates would see the value of their currencies rise—making food grains and oils denominated in dollars more affordable, not less. The only way inflation gets exported to these other countries is if they attempt to maintain the values of their currencies below the levels that markets would otherwise take them. That inflation is purely homegrown.

That point is also exactly the one I made last time with respect to Chinese inflation:

"To keep the nominal exchange rate from rising, the People's Bank of China in effect prints yuan and buys dollars. Though this has limited impact on any real fundamentals, it is the source material for inflation."

I did, however, leave one unfinished piece of business in the previous blog post:

"Of course, the astute and skeptical among you might ask, if the money-to-inflation nexus is relevant to China, why not the United States? A fair question, one that I will take on another day."

Well, it's another day, so here we go. In China, increases in the monetary base—the stuff that the central bank directly creates—translate pretty directly into broader measures of money held (and spent) by the public, as illustrated by the relative stability of the so-called M1 and M2 multipliers: 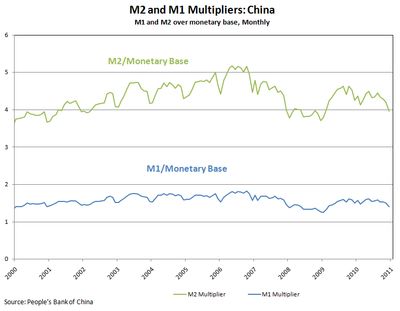 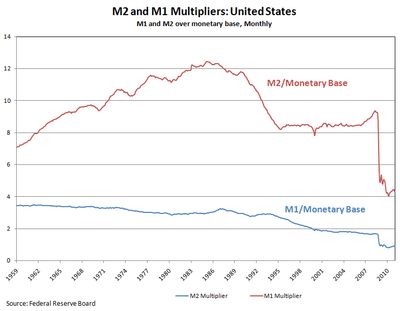 Admittedly, the collapse in the M2 multiplier in the United States—which has, for practical purposes neutralized the inflationary impact of the increase in the Fed's balance sheet—may not last forever. If it reverses, I for one will read this again.

Listed below are links to blogs that reference Global inflation and the Fed: One more time :

After reading your very interesting piece, I shall be grateful if you can throw some light on the following:

First, the relevence of monetary base (M1 and M2) to gauge price inflation, because as Michael Woodford, et al, have shown, electronic money, credit, repos, shadow-banking, makes it difficult to make the connection between money supply and inflation (unlike in 1960's).

Second, possible differences between the determinants of monetary base between US and China.

Oops. The collapse of M2. "... has neutralized the inflationary impact of the increase in the Fed's balance sheet." Rather, the collapse of M2 illustrates that the tail thought it was the dog.

But my point is that the Fed is not "flooding the economies," it is giving cheap money to the financial sector. Far from acting as a passive multiplier, these folks are levering up and carrying their trade to emerging market investments and commodity futures. Paul Krugman aside, and the recent signs of weakness in the emerging market bubbles aside, it is clear that the Fed is indeed exporting higher prices.

Besides the year over year increase in gasoline prices of 65 cents, and the obvious double digit increases in food that the Fed chooses to ignore, there is now a parabolic price move occurring in MIT's billion price survey. The three month inflation rate annualized of the MIT index is a hot 6 percent.

Inflation has already raised its ugly head in America even without the currency adjustments you speak of. If those dollar peggers actually did revalue, the US would have double digit inflation in a heartbeat. I say we are close already. Better be careful what you wish for.

I can't help but get a sense that Ben will be one of many unemployed shortly. I know there's talk about QE3 but with the inflation monster starting to nip and the politicians looking for a scapegoat... well. I won't be surprised.

Your comment, "The only way inflation gets exported to these other countries is if they attempt to maintain the values of their currencies below the levels that markets would otherwise take them. That inflation is purely homegrown." raises a couple questions I hope you would answer.

1. How can anyone that works at the Fed seriously talk about the true market value of another country’s currency? - The very idea of the Fed accusing another country of currency manipulation makes me laugh. Perhaps the Fed should sweep their own porch before attempting to sweep the porch of another.

2. If you and Bernanke believe that China should let the markets dictate the value of their currency, why don't you have the same problem with the Fed dictating interest rates, instead of the market determining them? LOL, it brings me such humor.

3. If China decides to let their currency fluctuate to the dollar, what happens to the value of the U.S. debt they hold? Hmmm....

4. If your belief is truly that markets should determine the value of a currency (interest rates), would you support the idea of having competing currencies here in America?

I look forward to anyone that might actually respond to these non-CNBC digestible questions.

I'm not so sure that they haven't been restructuring with the moves that they've been doing.

Really great blog and great post. Going to read your other posts...

You seem to be focused on the irony of the Fed lecturing anyone.

If you want to answer your own questions you should be thinking about the consequences of China's policies on China.

Chinese currency policy is not some exogenous force like the weather. They are making decisions for their own reasons and now they are facing the predictable consequences of those choices.

Their scope of action is constrained just as US monetary policy is and in fact now in 2011 it may be even more so because they are caught by BOTH the fundamentals and their own rhetoric This fact actually increases the leverage of the US in the near term to do manipulate expectations because the risk of sudden adjustments by the Chinese counter parties is lower and the chance of constructive gradual moves is greater.