As 2010 nears its end, my colleagues and I are beginning the process, familiar to organizations public and private, of evaluating performance in the past year and setting goals for the year ahead. In that process, one question is pressed: What does success look like?

It is a good question for monetary policy, and one I touched on a couple of posts back. As in that post, I'll cite my boss, Atlanta Fed President Dennis Lockhart from his Nov. 16 speech in Montgomery, Ala.:

"In my mind, the perceived risks—particularly the risk of overshooting inflation—must be weighed against the risks that could be associated with a policy of inaction. Chief among those risks is a recessionary relapse possibly tipping into a long spell of deflation. Through the summer there were some signs of renewed disinflation, which could lead to deflationary expectations taking hold.

"I think it is important to stress that our experience in dealing with inflation versus deflation is not symmetric. In the event of a policy overshoot, inflation containment requires the implementation of the mostly familiar strategy of raising short-term interest rates. In the event of an undershoot, however, dealing with a deflationary spiral and the attendant real consequences would be far less familiar territory for policymakers."

So, in President Lockhart's view, there is the statement of objective—insurance against an unwanted deflationary spiral. And the measure of success? Again from President Lockhart, as quoted in my previous post:

"In regard to price stability, this policy has already shown some signs of success by altering inflation expectations and reducing the risk of unwanted disinflation. To explain, inflation expectations extracted from Treasury inflation-protected securities, or TIPS, spreads over like-duration Treasury securities were declining persistently over the course of late spring through summer.

"Following the August 27 Jackson Hole speech by Fed Chairman Ben Bernanke, these spreads have recovered to previous levels. In addition, according to analysis we've done at the Atlanta Fed, deflation probabilities reflected in TIPS have fallen from the high levels prior to the September FOMC meeting."

Those deflation probabilities were described in an earlier macroblog post, and if you are looking for a measure of success, here is a picture: 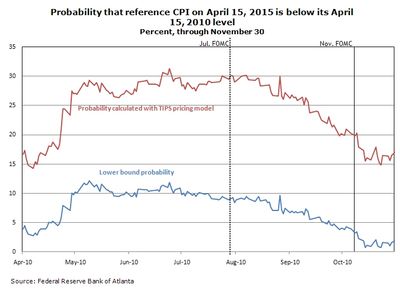 As of today's update, these probabilities have fallen to the levels observed prior to the economy's summer soft patch. Importantly, the deflation probabilities have retreated without a movement of straight inflation expectations outside of bounds that are (arguably) consistent with what Chairman Bernanke has described as "the mandate-consistent inflation rate." Of course, the full story has yet to be written. But it looks like a promising start to me.

Note: The deflation probabilities mentioned in the blog are published weekly as part of the Atlanta Fed's Inflation Project. For a description of inflation expectations, measured as the breakeven rates calculated from TIPS yields, see this article from the Federal Reserve Bank of San Francisco.

By Dave Altig, senior vice president and research director at the Atlanta Fed

How did you create the latter figure? Using the Fed's own constant maturities series (for both the nominal and real yield), the figure I come up with is less impressive. It shows a turnaround in inflation expectations about the time QE2 is promoted by Fed officials, but then inflation expectations stall and remain far from the "mandate-consistent inflation rate."

Here is a post where I placed one such graph.

Clearly the Fed has little or no understanding of the economy, as demonstrated by their total failure to see(let alone counteract) the massive debt bubble and resulting financial crisis that afflicted (and still afflicts) the US. This is not to malign their possible good intentions but simply reflects the reality of a complex and inherently unpredictable process. Why then should they be asking themselves what success looks like, since they couldn't even recognize failure until it bit them in the ass? And even if they did brand some event as 'success', how could we ever know (until much later) that it was really so?

The answer is obvious - they shouldn't even try. Let the market figure out interest rates - it does a much better job.

One matter that I am sure you have thought about, though didn't expressly mention in this posting is what the success of the quantitative easing programs would look like. To the best of my knowledge the goal of QEII is to shift capital market participants further out on the risk curve with the intent of causing a positive impact to the real economy i.e. increasing employment. However, I have recently been theorizing about the implications of globalization of finance and how it might actually be preventing this monetary policy from working. Who at the Federal Reserve, that you might know of, is thinking about this issue? If you observe fund flows data, it isn't hard to see capital shifting out on the risk curve (cash to bonds, bonds to equities, and theoretically equities to real investments, etc.) BUT the vast majority of this shift is occurring outside of the United States and in particular emerging markets. It appears that the freedom of capital to flow with relative ease from country to country might actually be circumventing the Fed's actions from working. If this were true, in effect the Federal Reserve would be incentivizing employment every where else but the United States. Without isolating the capital mandated to remain within the United States QEII seems to be, at best, steralized in terms of its ability to improve the US economy...and at worst it is counter productive.

Another question/thought I have had...who at the Federal Reserve has considered that if investment capital remains at a fixed mandate for risk tolerance...as investors are forced out on the risk curve they are in essence utilizing less and less capital (due to structural mandates to remain within a preset risk tolerance level) which in theory implies the further out on the curve they go...the less fire power there is to heal the real economy.

Could you please provide me with any feedback or thoughts you would have about these views. Thanks for your time.

I appreciate that David Altig and colleagues, like members of any organisation, have to ask the questions like “What would successful achievement of the tasks given us look like?”

But I think that in the case of the Fed, this is like a bunch of people given the task of making better bows and arrows during World War I asking a similar question. The latter hypothetical people have been given a silly task.

As any number of economists have pointed out, the Fed’s quantitative easing efforts have now descended to farce. That is, QE2 may reduce interest rates from 0.5% to 0.3%. Does anyone seriously think that will do any good? Plus there is Danny’s point above about most of the extra money flowing out of the U.S.

I suggest that what has gone wrong is the separation of fiscal and monetary policy, and to an extent that the great economists never envisaged. Keynes and Abba Lerner certainly though the two should be merged. And Milton Friedman in his 1948 American Economic Review paper argued likewise: see http://nb.vse.cz/~BARTONP/mae911/friedman.pdf

Merging fiscal and monetary does NOT mean the end of independent central banks (CBs): it just involves a slight change in the rules governing the relationship between CBs and treasuries. For example, when the CB thinks extra spending is warranted because of subdued inflation and excess unemployment, the CB says to government “You can spend more and/or reduce taxes, and do it any way you like. That’s a political question. Our task is purely to optimise the inflation unemployment relationship.”

If over the last year or so the Fed, instead of printing extra money so as to fund QE, had channelled the money to Congress, who in turn let’s say channelled it into the pockets of Main Street (e.g. via a payroll tax reduction), the stimulatory effect would have been ten times larger, plus more of the stimulus would have been confined to the U.S.

David Beckworth@December 03, 2010 at 09:32 AM: "How did you create the latter figure? Using the Fed's own constant maturities series (for both the nominal and real yield), the figure I come up with is less impressive."

The Federal Reserve's objectives - its dual mandate, set by Congress - are to promote a high level of employment and low, stable inflation. Unfortunately, the job market remains quite weak; the national unemployment rate is nearly 10 percent, a large number of people can find only part-time work, and a substantial fraction of the unemployed have been out of work six months or longer. The heavy costs of unemployment include intense strains on family finances, more foreclosures and the loss of job skills.