Some in Europe lag behind

Since around June, news of European fiscal deficits, financial markets stresses, potential sovereign debt defaults, or even a breakup of the euro zone has faded. The focal points of global economic policy have shifted to the sluggish recovery in developed countries and potential for further unconventional monetary stimulus.

A cursory look at a few key data reflects an improved European economic outlook from this summer. The simple dollar/euro exchange rate (see chart 1) shows that since June 1 the euro has appreciated nearly 15 percent against the dollar. While many different factors affect exchange rates—and increasing expectation of further monetary stimulus in the United States has helped the euro appreciate against the dollar—some of the appreciation seems to reasonably reflect the relative improvement of market sentiment about the fiscal situation in several European countries. Similarly, looking at the major stock indexes (mostly in Western European nations) shows a steady improvement from the lows of this summer, with the Euro Stoxx 50 index rising nearly 11 percent since June 1 (see chart 2). Thus, looking at most aggregate European data paints a picture of relative improvement, though most forecasters expect sluggish growth going forward. It's when one examines individual countries that it becomes clear some are lagging behind. 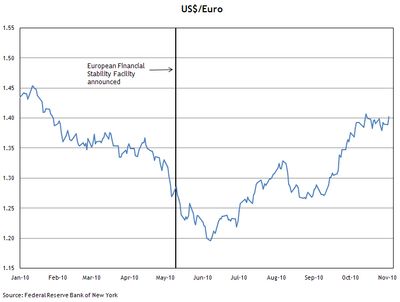 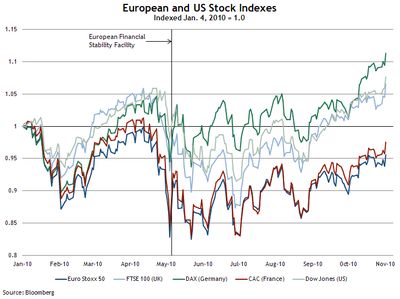 While the early stages of the European sovereign debt crisis centered on the fiscal scenario in Greece, market stress eventually spread to all the so-called PIIGS (Portugal, Ireland, Italy, Greece, and Spain) and even appeared to threaten the wider euro zone. Following an assortment of unprecedented interventions—highlighted by the 750 billion euro (approximately $1.05 trillion) rescue package from the European Union (through the European Financial Stability Facility) and support from the International Monetary Fund—market confidence slowly grew, and since this summer, various measures of financial market functioning have stabilized.

But while the threat of wider European contagion appears contained, fragilities remain. As has been documented in a variety of media reports, the recent improvement masks the individual euro zone peripheral countries' struggles with implementing fiscal consolidation, improving labor competiveness, resolving fragile banking systems, and staving off a crisis of confidence in sovereign debt markets.

Both bond spreads of individual European sovereign debt (over German sovereign debt) and credit default swap spreads show some stabilization for a few of the euro zone countries, but spreads in three countries—Greece, Ireland, and Portugal—are distinctly more elevated than the others (see charts 3 and 4). 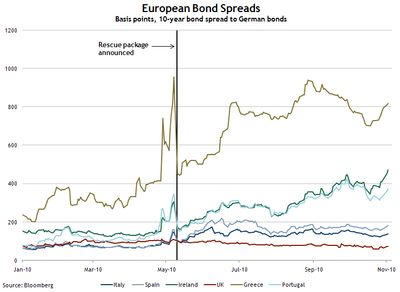 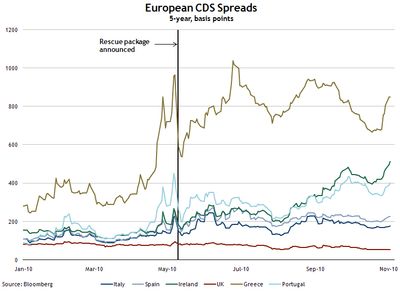 The reasons for rising financing costs in these countries vary. In Ireland, for example, concerns about the Irish banking system (and the resolution of Anglo Irish Bank, in particular) were initially the driving cause. In Portugal, it was doubt over the implementation of necessary economic reforms that drove investor reluctance to provide financing; the recent adoption of austerity measures into the 2011 budget should alleviate some worry. But now much of the market action in both Irish and Portuguese bonds is focused on tough new bailout rules being implemented by the European Union.

On one hand, the renewed financing pressure brought upon these countries is less worrisome because of the backstop of the European Financial Stabilization Facility (EFSF). In fact, Moody's thinks it is unlikely there will be a euro zone default. Should market financing become too expensive for Greece, Ireland, or Portugal, the special purpose vehicle (SPV) imbedded within the EFSF could help by providing financing up to 440 billion euros ($616 billion).

But on the other hand, as part of the wider crisis prevention following the introduction of the EFSF, most European governments are implementing some level of fiscal austerity measures. From a political perspective, the implementation of these austerity measures varies widely, as demonstrated recently by the strikes in France over legislation trying to raise the retirement age. In addition to the uncertainty of implementing fiscal consolidation, there is pressure from the administrators of the EFSF to enforce burden-sharing on private bondholders in the event of any future bailout. This pressure is the primary impetus causing investors to shun the weaker peripheral countries.

One important player in this saga is the European Central Bank, which began buying European bonds for Greece, Ireland, and Portugal (among others) in conjunction with the EFSF announcement. Yet in recent weeks this bond buying has abated, and with money market pressures remaining in Europe, "something clearly has to give way," as Free Exchange wrote recently.

Listed below are links to blogs that reference Some in Europe lag behind :

The problem is, if Portugal or other country Less pay your financial service, the investor loss lot of money, and system will be fast to underground.The unit money(Euro) game over.

Moody's thinks it is unlikely there will be a euro-zone default?? Highlighted? In 2007 Moody's rated Japan A2 and subprime pls AAA. Which do you think worked out better?

There may be no better indication that the system is about to implode.

The problem is there are simply way too many folks in China, Europe, and the UNITED STATES engaged in 'finance.' Having 'solved' the agricultural problem with the green revolution in the 1960s ( mass produced el cheapo fertilizer for all ) all these folks moved off the farm and went to work at the local bank/hedge fund/gambling hall ... and what they have designed is the perfect 'world financial casino' that is destined to blow itself up.

No two countries are exactly the same so by giving up their monetary policy independence to form the ECB these countries have lost the ability to steer their economies at will, each country has different macroeconomies and trying to solve them all with the same "pill" isn't working for countries which clearly have varying debt-GDP ratios.
There is a saying that a person is only as rich as the people around him or her and that is the case with the European Union where the booming economies have tax payers funding the struggling economies and by allowing the interbank rates to rise, the ECB is showing it's inability to sustain different economies at the same time. Increasing interest rates only end up reducing outputs in low debt-GDP Euro countries and having the opposite effect in high debt-GDP ones, it'll be a case of you win some, you lose some. The onus is left to the stronger economies, France and Germany, to keep supporting the struggling economies till those economies pick up