« Some in Europe lag behind | Main | Just how does policy work? »

On October 26–27, the Atlanta Fed's Community and Economic Development team, in partnership with the Bank's Center for Human Capital Studies, the Ewing Marion Kauffman Foundation, and the Federal Reserve Bank of Dallas, sponsored a conference titled "Small Business, Entrepreneurship, and Economic Recovery: A Focus on Job Creation and Economic Stabilization." The conference covered a large range of topics including employment, financing, and public policy issues, and material summarizing the findings from the conference and related information will be published in the coming weeks. (You can find the conference papers here.)

One of the things that struck me during the conference is the challenge of simply defining and measuring entrepreneurial activity. For instance, a paper presented by Leora Klapper from the World Bank described recent World Bank efforts to systematically collect country-level data on business formation using data on the number of new domestic corporations—private companies with limited liability each year.

Klapper presented a cross-country chart of this measure, by which countries are grouped into relative income buckets, with the United States being in the "high income" bucket. What chart 1 shows is that entrepreneurial activity declined in all categories of countries in 2009. For high-income countries (including the United States), entrepreneurial activity came to a standstill in 2008 and declined 10 percent in 2009. 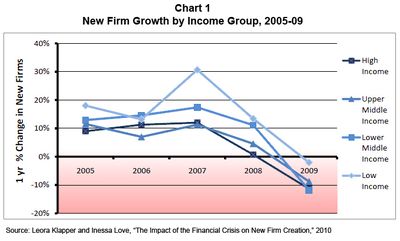 This evidence is consistent with measures of job creation from opening employer firms (firms with a payroll) in the United States, such as those contained in the Business Employment Dynamics data. These data are from government administrative unemployment insurance records. On the first day of the conference, John Haltiwanger from the University of Maryland gave a fascinating presentation using the data on firms with a payroll and longitudinally linked versions of these data (the Business Dynamics Statistics) to illustrate a decline in job creation in recent years at businesses that have payrolls and, importantly, a decline in job creation at opening employer firms.

However, another paper at the conference by Robert Fairlie from UC-Santa Cruz showed a measure of entrepreneurial activity that has been on a rapid increase in recent years. Chart 2 shows a picture of Fairlie's measure, which is also published by the Kauffman Foundation as the Index of Entrepreneurial Activity. 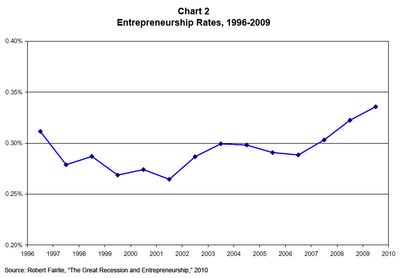 This measure is based on the Current Population Statistics survey, which among other things asks respondents the question "Do you have a business?" Dr. Fairlie matches this response with the response in the previous month to identify the number of new businesses created (subject to meeting criteria, such as devoting at least 15 hours per week to this business, and restrictions, such as the exclusion of adults over age 65). Importantly, Fairlie's measure of new businesses picks up new nonemployer businesses, many of which are not incorporated.

What is particularly interesting about Fairlie's research is that he shows not only that this measure of entrepreneurial activity has surged, but that it is closely related to movements in local unemployment rates. That is, he has potentially uncovered an "entrepreneur of necessity" effect caused by high unemployment. For many unemployed workers, the benefits of starting a business during a weak economic environment outweigh the costs. It is noteworthy that the largest proportionate increase in this measure of entrepreneurial activity is by people with less than a high school diploma. This group has been especially hard hit by the recession and weak recovery, and it appears that many have responded by starting their own business.

If entrepreneurial activity is a source of economic growth generally, then a surge in entrepreneurial activity is good news for the economic outlook, right? Indeed, Fairlie cites a 2009 Kauffman Foundation study by Dane Stangler that finds over half of the current Fortune 500 firms started during recessions or bear markets. Also, a 2010 Kauffman study by Michael Horrell and Robert Litan find that, on average, start-ups are not affected in the long term if they start in a recession. However, Horrell and Litan also find negative impacts when the recession is prolonged. To the extent that historical patterns are repeated, one implication of the latter finding is that cohorts starting businesses right before or at the start of the 2007&ndash;09 recession may have worse outcomes relative to firms starting more recently.

More generally, this study raises questions about the current economic recovery. For example, if the number of new firms with payrolls is down but the number of nonemployer businesses is up, then what could be expected to happen over time? At what rate do new businesses with no employees become employers, and how fast do they tend to grow? This question is especially important because a new business with no employees generates fewer jobs than a new business with employees unless the nonemployer is purchasing labor services through some other means. As noted here, some researchers are skeptical of the economic importance of growth in nonemployer businesses without controlling for possibly important factors such as the industry they are in or their revenues. According to the U.S. Census Bureau, most nonemployers are self-employed individuals operating very small unincorporated businesses. It also seems reasonable to think that many of them are independent contractors providing labor services to other firms. Clearly, there is no shortage of need for more research on these topics.

By John Robertson, a vice president and senior economist in the Atlanta Fed's research department

Listed below are links to blogs that reference Entrepreneurs of necessity :

I am not an "Entrepreneur of Necessity" but an Entrepreneur of Opportunity. I recently started my own Consulting LLC company. Having worked 17 years as an Architect and for a national home builder. I refuse to stay home and collect an Unemployment Check from my layoff of over a year.

I created my own consulting service that can: work for less fee than my competition (I have little overhead), I have a quicker turn around than my competition (working long nights and weekends). Because of my education and experience I provide bundled/specialized services that would require several companies instead of just me. I don't want to rub it in the national homebuilder's face, but it's their loss and my family's gain.

Don't get me wrong, I have never hustled more in my entire life. I am opportunistic and entrepreneurial. I find that people are interested in working with me because as the saying goes "If you want to get something done, ask a busy person to do it".

I do wish there was help with reducing the taxes, cost for health care and insurance. These costs make it difficult for me to keep what I am struggling to earn. If the costs were not so onerous, I would hire one or two employees.

This is what Americans do- they can survive. I'm sure thousands of folks have their own company, and the trend has been sometime in the making. Many people simply do not want to buy into the game, which appears grossly unfair, as an employee.

I have to think a rational case could be made that many people are better off with three acres and some seeds than a vast majority of jobs.

I think some of these business ventures are also driven by a rejection of corporate America and the domination and exploitation that is perceived now by our population. Instead of rising up to a skillbase for IBM or GE, it's better to work part time at some job and do your own thing on the side. And they are likely right to do this in my estimation.