« What does "structural" mean? | Main | A good time for price-level targeting? »

In the recent Survey of Professional Forecasters, economists were asked to give their subjective probability of deflation during the next year. Specifically, they were asked about the chances that the quarterly consumer price index excluding food and energy (core CPI) will decline in 2011. According to the respondents, the probability of core CPI deflation in 2011 was only 2 percent.

This rather sanguine view of the probability of deflation is encouraging. But is it a view shared by noneconomists? While there are many sources used to measure inflation expectations, there aren't many that gauge inflation uncertainty or the risk of deflation. However, one might estimate a probability of deflation as seen by investors by exploiting the different deflation safeguards of a pair of Treasury Inflation Protected Securities (TIPS), which have about the same maturity date but different issue dates.

Here's the idea: A TIPS cannot pay less than its face value at maturity, so the principal repayment of a five-year TIPS issued today is not reduced if the five-year rate of inflation is negative over the life of the security. But a 10-year TIPS issued five years ago will have its capital gain from accrued inflation reduced if there is a net decline in the CPI over the next five years. As a result, part of the real yield spread between the 10-year and five-year TIPS issues should reflect the value of the better deflation safeguard of the latter security.

In a comment on a paper by Campbell, Shiller, and Viceira, Jonathan Wright derives a very simple formula for calculating a lower bound on the probability of deflation using this real yield spread. (The lower-bound formula is rm/ln(CPI5yr/CPI10yr), where r is the yield spread between the 10-year and five-year TIPS real yields, m is the number of years until the midpoint of the maturity dates of the two TIPS, and CPI5yr/CPI10yr are the levels of the NSA CPI on the issue dates of the five-year and 10-year year TIPS. These reference CPIs are available here. Deflation is defined as the level of the CPI being lower than its value on the issue date of the five-year TIPS.) Wright's calculation makes a number of simplifying assumptions, some of which are counterfactual, but it is easy to compute—almost literally a back-of-the-envelope calculation if you have two real TIPS yields in hand. The formula also has the advantage that it does not require any assumptions about the probability distribution of inflation.

To get exact probabilities of deflation instead of a lower bound, I developed a simple model for TIPS pricing. The model is an extension of the TIPS pricing model developed by Brian Sack. One has to make a lot of assumptions to derive these estimates—which you can read about in the appendix to this post (link provided in last paragraph)—but let's get to the main results. The figure below plots the probability that the level of the reference CPI on April 15, 2015, is lower than its April 15, 2010, level. (The reference CPI is the nonseasonally adjusted consumer price index interpolated to a daily frequency; it is calculated by taking a weighted average of the CPI two months ago and three months ago.) If the April 2015 reference CPI ended up below this threshold, then the deflation safeguard for the five-year TIPS would kick in. Also included in the graph is the lower bound of this "deflation probability" calculated using Wright's formula. 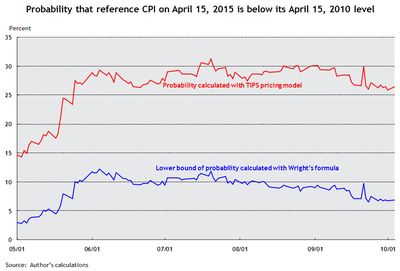 An alternative way of generating deflation probabilities is to exploit the estimated "confidence interval" from a forecasting model of inflation. When I use a variant of the inflation model proposed by Stock and Watson (for those interested in more detail, the model I am using is the Stock-Watson unobserved components with stochastic volatility, or UC-SV model), it says there is about a 10 percent chance that average CPI inflation over the next five years will be below zero.

Is this the last word on estimating deflation probability? Of course not; there are more than a few pitfalls in this method of calculating a deflation probability, some of which are described in the aforementioned technical appendix posted on the Atlanta Fed's Inflation Project. But this approach does have the advantage of exploiting information from market prices on traded securities. As such, it may prove a valuable addition to our toolkit of indicators. Consequently, we intend to update these estimates and post them on the Inflation Project web page every Thursday afternoon.

By Patrick Higgins, an economist in the Atlanta Fed's research department

Listed below are links to blogs that reference Using TIPS to gauge deflation expectations :

Even though point is pretty neat, personally I wouldn't rely on this too much. Liquidity of 5year TIPS markets would be higher now relative to the pre-crisis levels exactly for those same reasons you want to use it gauge deflationary expectations: it's a better hedge against significant medium-term inflation uncertainty.

I don't know who is included in the survey of economists, but I would put the probability that we will have deflation in 2011 at substantially above 2%.

I wonder if there's some reason that you don't simply calculate the value of the embedded floors in TIPS, and then use the delta of that option? It's not easy, as you can't use black-scholes and you have to first strip out seasonalities and such...but it's actually a market price rather than a strange economist view of a market price.

For that matter, why not just compute the delta of 0% ZC floors, which are quoted and trade in the market?

Interesting shorthand approaches, but it seems to me that if economists really wanted the market's view on this, they ought to calculate an actual number.