« Some observations regarding interest on reserves | Main | Just how curious is that Beveridge curve? »

Bloomberg's Caroline Baum recounts her recent conversation with the Atlanta Fed's own Mike Bryan under the headline For Good Economic Forecasts, Try Flipping a Coin:

"How do economists fare when it comes to real forecasting, to predicting [gross domestic product] GDP growth and inflation one year out? About as good as a coin toss, according to Bryan's research. Less than half the economists did better than the naive forecast, which is based on no understanding of the economy and merely assumes next year's outcome will be the same as this year's. It's what you'd expect if the results were purely random."

A case in point could be found yesterday on Bloomberg, which featured a "chart of the day" that looked something like the one below (though I've updated the data for manufacturing inventories, given today's factory orders report): 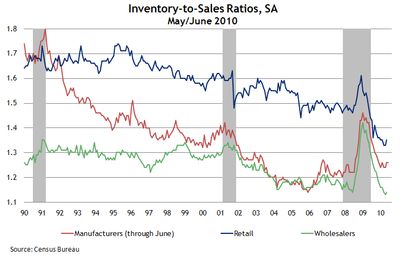 The chart was accompanied by this commentary:

"U.S. business inventories are so low relative to demand that any increase may act as a catalyst for larger companies to add workers, according to Nicholas Colas, chief market strategist at BNY ConvergEx Group."

A few days back, in The Wall Street Journal, you could find this:

"Until recently, businesses had helped supercharge economic growth by restocking inventories. Now the oomph from inventories is waning.

"In the second quarter, the change in private inventories added slightly more than one percentage point to the 2.4% increase in gross domestic product from the first quarter, measured at a seasonally adjusted annual rate, the Commerce Department said Friday.

" 'Our sense is current inventories are about where they need to be globally, both in industrial distribution and with the large North American retailers,' John Lundgren, chief executive of Stanley Black & Decker Inc., said in a July 21 call with analysts discussing the tool and hardware maker's second-quarter results."

But, on the same topic, Seeking Alpha opined:

"Inventory increases added 1.05% to second quarter GDP. Based on the annual revision, they added 2.64% to first quarter GDP or 71% of the total increase. Inventories were also responsible for approximately two-thirds of the GDP increase in the fourth quarter of 2009. The entire economic 'recovery' has essentially been an inventory adjustment [emphasis theirs]. This does not bode well for the future."

So one analysis suggests that the latest readings on inventories portend a boost to GDP, one foresees a drag on GDP, and yet another divines that inventories are basically played out as an economic story for the balance of the year.

Again from the Baum piece:

"Bryan said it's not just about getting the number right. 'It's about the narrative.' "

For comparison, it's also useful to take a longer look at what effect inventories have on GDP growth coming out of a recession; see the graph below. It charts the percentage point contributions of various components to real GDP growth in the first four quarters following the end of a recession (the current recession is assumed to have ended in second quarter of 2009). I've shown on the graph the percentage contribution of inventories to the last seven recoveries, beginning with the one in 1971. 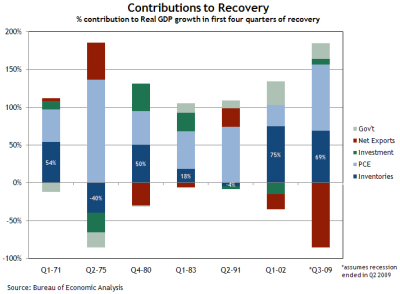 Regarding the point made in Seeking Alpha, inventories have contributed around 70 percent to the economic recovery recently, but in the recovery that began in 2002 inventories contributed 75 percent in the first four quarters. So the last two recovery periods stand out for large inventory components. But looking across the data, it's hard to say what an ordinary inventory contribution would be. Regardless of whether inventories are an unusually large part of this recovery, in absolute levels the scale of the recent inventory cycle—the initial liquidation and the subsequent restocking—has been unprecedented.

Listed below are links to blogs that reference What makes forecasting tough :

I remember around December 2007, when economists gave something like a 20% chance of recession, there was a Bloomberg poll that showed the public felt we were already in one.

Interestingly, most people would say the recession has never ended, though economists confidently point to the turn to positive GDP one year ago. What if there is another downturn already starting, and the NBER committee decides it is really one large event?

Regardless of whether inventories are an unusually large part of this recovery, in absolute levels the scale of the recent inventory cycle—the initial liquidation and the subsequent restocking—has been unprecedented.

I remember around December 2007, when economists gave something like a 20% chance of recession, there was a Bloomberg poll that showed the public felt we were already in one.

If we can't forecast, surely this makes the case for analysis of effective design of automatic stabilisers into an interesting question?

It is a scientific fact that economic forecasts are mathematically infallible. All you need is the G.6 debit and deposit turnover release.

The “econometric” people don’t like the equation because it is impossible to calculate P and T. Presumably therefore the equation lacks validity. Actually the equation is a truism – to sell 100 bushels of wheat (T) at $4 a bushel (P) requires the exchange of $400 (M) once (V), or $200 twice, etc.

The real impact of monetary demand on the prices of goods and serves requires the analysis of “monetary flows”, and the only valid velocity figure in calculating monetary flows is Vt. Income velocity (Vi) is a contrived figure (Vi = Nominal GDP/M).

The product of MVI is obviously nominal GDP. So where does that leave us? In an economic sea without a rudder or an anchor. A rise in nominal GDP can be the result of (1) an increased rate of monetary flows (MVt) (which by definition the Keynesians have excluded from their analysis), (2) an increase in real GDP, (3) an increasing number of housewives selling their labor in the marketplace, etc. The income velocity approach obviously provides no tool by which we can dissect and explain the inflation process.

To the Keynesians, aggregate demand is nominal GDP, the demand for services (human) and final goods. This concept excludes the common sense conclusion that the inflation process begins at the beginning (with raw material prices and processing costs at all stages of production) and continues through to the end.

The Fed first calculated deposit turnover in 1919. It reported weekly until 1941 (like M3, the series was also discontinued, in Sept. 1996). The figure “other banks’’ was used until 1996. Prior to this revision Vt included all banks located in 232 SMSA’s excluding N.Y. City. This was the best that could be done to eliminate the influence on prices of purely financial and speculative transactions. Obviously funds used for short selling do not contribute to a rise in prices.

The Fed calculates these velocity figures by dividing the aggregate volume of debits of these banks against their demand deposits.

We do know that to ignore the aggregate effect of money flows on prices is to ignore the inflation process. And to dismiss the concept of Vt by saying it is meaningless (that people can only spend their income once) is to ignore the fact that Vt is a function of three factors: (1) the number of transactions; (2) the prices of goods and services; (3) the volume of M.
Inflation analysis cannot be limited to the volume of wages and salaries spent.

To do so is to overlook the principal "engine" of inflation - which is of course, the volume of credit (new money) created by the Reserve and the commercial banks, plus the expenditure rate (velocity) of these funds. Also overlooked is the effect of the expenditure of the savings of the non-bank public on prices.

The (MVt) figure encompasses the total effect of all these monetary flows (MVt).

Economist still try to conjure up learned interpretations. Now its the yield curve and its associated long term contractions and expansions of business activity, prices, etc.

“It’s just that the yield curve, or what it represents, is possibly the best leading indicator of the business cycle”

Everyone on the FED's technical staff that thinks the money supply can be managed by using interest rates should lose their job and their pension.

People are just people. Sometimes they are right in their forecasts, sometimes not. The most important point is to be able to acknowledge mistakes that we make. Perfection comes with practice.

there are two papers one has to mention when discussing inflation forecasts.
The naive approach was first tested by Atkeson and Ohanian.
Stock and Watson published results of a comprehensive quantitative comparison of existing models.