« How "discouraged" are small businesses? Insights from an Atlanta Fed small business lending survey | Main | Another view of the structural versus cyclical unemployment question »

Gross domestic product (GDP) is growing, supported by strong labor productivity numbers and modest employment growth. Even after today's downward revision to first quarter labor productivity measures, growth in labor productivity in the business sector has averaged 5.6 percent over the last three quarters—more than twice the long-run average. Okun's law has underpredicted the rise in unemployment, and some commentators call for a jobless recovery. Today, Federal Reserve Bank of Atlanta President Dennis Lockhart gave a speech on the prospects for the future of employment and labor productivity that posed the question:

"… how long can firms ride this productivity growth before having to yield to new hiring to support greater activity?"

To provide some context, below is a chart that shows a decomposition of GDP growth during post-WWII recessions. This decomposition does not explain growth, but it does show the relative contribution of various factors such as average labor productivity, average hours worked, the unemployment rate, and other labor market variables. 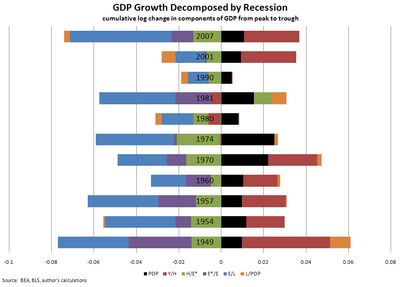 Note: The decomposition is based on the identity.

As this chart shows, relatively high labor productivity growth during a recession is not a phenomenon isolated to the 2007–09 and 2001 recessions (for present purposes, the end of the most recent recession is identified with the trough in GDP in the second quarter of 2009). All recessions from WWII through 1970 also featured sizable growth in labor productivity. Notice also that these recessions experienced large declines in the employment rate (rise in the unemployment rate). Hence, the productivity gains were attributable to outsized reductions in hours rather than gains in output. The same also holds true of the 2007–09 recession. As President Lockhart noted:

"Many employers reacted to the downturn by aggressively cutting their workforces, reorganizing remaining workers, and cutting other costs."

Of course, the big question centers on the recovery. Specifically, does the outsized contribution from labor productivity during the last recession portend continued outsized gains (and hence subdued employment prospects) during the recovery and expansion as well?

Perhaps history can provide a guide. The next chart provides the same GDP decomposition, but this time for the first three quarters of the recovery (we chose three quarters to allow a common comparison across recoveries). This chart reflects at least two salient features. First, the fastest way to employment growth is faster GDP growth—recessions that are immediately followed by very strong GDP growth also tend to have strong employment growth. Second, productivity remains an important contributor to growth, and that contribution has been especially large during the early phases of the past three recessions. 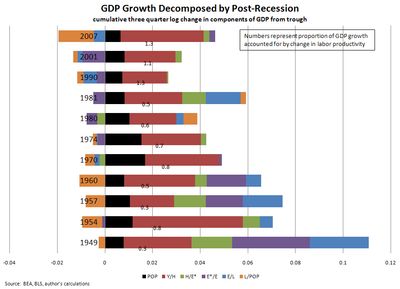 President Lockhart's interpretation of these observations is that many employers:

"… have reacted to the upswing by holding employment at or near recession levels, seeking efficiencies in supply chains, investing in labor-saving automation, and generally tweaking their business models to operate more efficiently than before the recession. We've heard this story frequently in anecdotal accounts of our directors and business contacts across the Southeast.

"As long as efficiency and productivity gains can be achieved in this way, employers may remain hesitant to hire."

"I do not expect the recent outsized productivity growth to continue indefinitely and become a new, permanently higher trend rate. Some degree of 'wait and see' behavior is at work and is no doubt reflected in the productivity numbers. With growing economic momentum, deferral of hiring will become riskier.

"Some employment gains should result as labor productivity levels out and falls back over time to something resembling the historic trend rate. But the pace of hiring is likely to be gradual. Current data on the use of part-time workers suggest that businesses have some scope to increase hours without hiring new full-time employees. And there are other, more structural obstacles to the rapid reemployment of the jobless. Some jobs in the construction sector and certain manufacturing industries are likely permanently lost, requiring some amount of migration of workers to other sectors. And, for a time, skill and geographic mismatches may frustrate employers willing to hire.

"Also, the weight of uncertainty about the future business environment makes a gradual pace of employment progress a reasonable assumption. I hear often from members of the business community that uncertainty regarding federal, state and local fiscal fundamentals and regulatory rules-of-the-game are feeding reticence to pull the trigger on new ventures, new hires and new investments. The recent European sovereign debt and banking pressures have added to uncertainty in financial markets.

"Sizing all this up, I expect recovery in the medium term to be neither jobless nor job rich."

The current Blue Chip consensus for second quarter GDP is about a 3.2 percent annual rate. Payroll employment expanded by an estimated 290,000 in April, and with an employment report out Friday that will likely feature very sizable gains (some forecasts calling for an addition of more than 500,000 jobs), the relative contribution of labor productivity to GDP growth in the second quarter is almost certain to decline sharply. However, most of the surge in May's number will be temporary U.S. Census workers, and this increase will reverse itself in pretty short order. Hence, it will probably take awhile to see how President Lockhart's forecast of continued modest employment growth pans out.

Listed below are links to blogs that reference The recovery: Job rich or job poor? :

He's probably right- companies want to do more with less. I wonder though, that we are entering a phase where "work" for most of us is going to mean something much different than our past. If and when these companies hire folks back many of those workers could end up in reality being independent contractors under the guise of a full time employee.

That means they could be in constant job flux their entire career. Economic dynamics like a 30 year mortgage and company paid health-care and retirement go right out the window in that case.

In my point of view, no job rich and No job poor. you can be rich with any job... any way, thanks for the new research! :)

Current data on the use of part-time workers suggest that businesses have some scope to increase hours without hiring new full-time employees.
http://www.laptop-battery-chargers.com/compaq-presario-c500-ac-adapter.html