Economists often face such identification dilemmas, situations in which we would like to know whether supply or demand is the driving factor behind changes within a market. Additional data can often help solve the problem. In this case we might want to know about all of the loans applied for by small businesses, whether the loans were granted and at what rates, and specific information on loan quality and collateral. Alas, such data are not available. In fact, the Congressional Oversight Panel in a recent report recommends that the U.S. Treasury and other regulators "establish a rigorous data collection system or survey that examines small business finance" and notes that "the lack of timely and consistent data has significantly hampered efforts to approach and address the crisis."

We at the Federal Reserve Bank of Atlanta have also noted the paucity of data in this area and have begun a series of small business credit surveys. Leveraging the contacts in our Regional Economic Information Network (REIN), we polled 311 small businesses in the states of the Sixth District (Alabama, Florida, Georgia, Louisiana, Mississippi and Tennessee) on their credit experiences and future plans. While the survey is not a stratified random sample and so should not be viewed as a statistical representation of small business firms in the Sixth District, we believe the results are informative.

Indeed, the results of our April 2010 survey suggest that demand-side factors may be the driving force behind lower levels of small business credit. To be sure, when asked about the recent obstacles to accessing credit, some firms (34 firms, or 11 percent of our sample) cited banks' unwillingness to lend, but many more firms cited factors that may reflect low credit quality on the part of prospective borrowers. For example, 32 percent of firms cited a decline in sales over the past two years as an obstacle, 19 percent cited a high level of outstanding business or personal debt, 10 percent cited a less than stellar credit score, and 112 firms (32 percent) report no recent obstacles to credit. Perhaps not surprisingly, outside of the troubled construction and real estate industries, close to half the firms polled (46 percent) do not believe there are any obstacles while only 9 percent report unwillingness on the part of banks.

These opinions are reinforced by responses detailing the firms' decisions to seek or not seek credit and the outcomes of submitted credit applications. 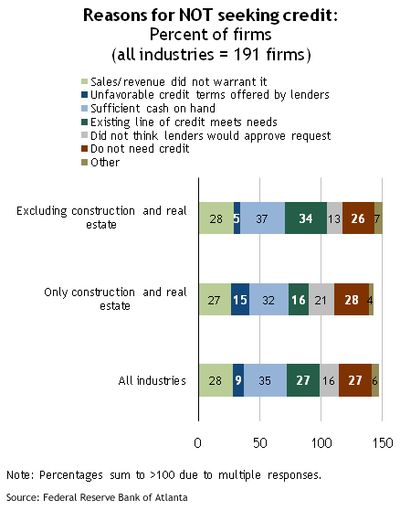 Of the 191 firms that did not seek credit in the past three months, 131 (69 percent) report that they either had sufficient cash on hand, did not have the sales/revenues to warrant additional debt, or did not need credit. (Note the percentages in the chart above reflect multiple responses by firms.) These responses likely reflect both the impact of the recession on the revenues of small firms as well as precautionary/prudent cash management.

The administration has recently sent draft legislation to Congress for a supply-side program—the Small Business Lending Fund (SBLF)—to address the funding needs of small businesses. The congressional oversight report raises a good question about the potential effectiveness of supply-side programs:

"A small business loan is, at its heart, a contract between two parties: a bank that is willing and able to lend, and a business that is creditworthy and in need of a loan. Due to the recession, relatively few small businesses now fit that description. To the extent that contraction in small business lending reflects a shortfall of demand rather than of supply, any supply-side solution will fail to gain traction."

That said, one way that a supply-side program like SBLF would make sense, even if low demand is the force driving lower lending rates, is if there are high-quality borrowers that are not applying for credit merely because they anticipate that they will be denied. We could term these firms "discouraged borrowers," to co-opt a term from labor markets (i.e., discouraged workers).

If a program increased the perceived probability of approval, either by increasing approval rates via a subsidization of small business lending or merely by changing borrower beliefs, more high-quality, productive loans would be made.

Just how many discouraged borrowers are out there? The chart above illustrates that, indeed, 16 percent of all of our responding firms and 21 percent of construction and real estate firms might fall into this category. I add "might" because the anticipation of a denial may well be accurate but based on a lack of creditworthiness and not the irrational or inefficient behavior of banks. Digging into our results, we find that 35 percent of the firms who did not seek credit because of the anticipation of a denial also cited "not enough sales," indicating that a denial would likely have reflected underlying loan quality.

In the labor market, so-called "discouraged workers" flow back into the labor force when they perceive that the probability of finding an acceptable job has increased enough to make searching for work, and working, attractive again. We should expect so-called "discouraged borrowers" to do the same. That's because if they don't, the likely alternatives for them, at some point, would be to sell the business or go out of business. It seems unlikely that, facing such alternatives, a "discouraged" firm would not attempt to access credit. The responses of firms in our sample are consistent with this logic; 55 percent of those who did not seek credit in the past three months because of the anticipation of a denial indicated that they plan to seek credit in the next six months.

Our results also provide some interesting data on an assumption underlying the policy debate: that those small businesses are credit constrained. Of the 117 firms in the survey that that sought credit during the previous three months, the following chart illustrates the extent to which these firms met their financing needs. 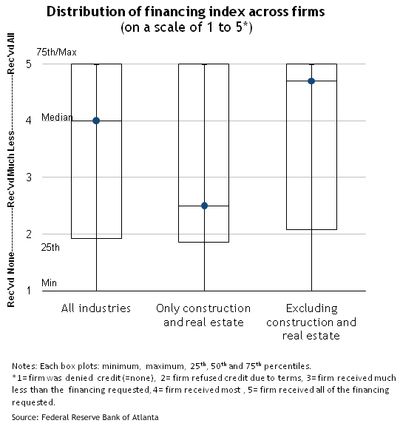 Based on firm reports of the credit channel applications submitted in the previous three months, we created a financing index value for each firm. Firms that were denied on all of their credit applications have a financing index equal to 1, while firms that received all of the funding requested have an index level of 5. Index levels between 1 and 5 indicate, from lesser to greater, the extent to which their applications were successful. In the chart we plot data on the financing index levels of all firms in our sample and then split according to whether the firm is in construction and real estate. Among construction and real estate firms, 50 percent of firms had an index below 2.5, suggesting most did not get their financing requests meet. In contrast, the median index value of 4.7 for all other firms suggests that most of these firm were able to obtain all or most of the credit they requested. This difference between real estate–related firms and others is really not surprising given that the housing sector was at the heart of the financial crisis and recession. But it does suggest that more work needs to be done to analyze the industry-specific funding constraints among small businesses.

By Paula Tkac, assistant vice president and senior economist, of the Atlanta Fed

Listed below are links to blogs that reference How "discouraged" are small businesses? Insights from an Atlanta Fed small business lending survey :

Excellent article; I have plugged it over at my own blog (and at Global Economy Matters). I don't know why the trackback has not shown up yet.

Anyway, it was very interesting get some real hard evidence (even if it is very specific sample) that deleveraging is NOT only driven by supply side constraints; to me this is one of the big untold stories of this financial crisis.

We have to admit that cash flow is one of the most common challenges entrepreneurs face. A prudent cash management
strategy has been proven to be vital in preserving a business capital and return.

Yes we have to admit about the cash flow is most common challenges entrepreneurs face.

Since small business drive the economy cash flow is the most important issue that they have. Buying inventory, making payroll and all the other financial obligations can easily put a company out of business without having access to immediate cash.

A good option would be a Business Cash Advance. It is based on your average monthly sales, not credit, so bad credit is ok and approval rates are 98%. They are unsecured, there is no personal guarantees, require no collateral, and will fund within a few days of applying. Also there are no restrictions on how you can use the money.

It is a good thing to create SBLF because it is appropriately for small business who can't afford the lending terms of the banks.

I couldn't agree with this post more. Our economy thrives on the hard work of small businesses, particularly online businesses such as international ecommerce trading firms and even sole proprietorships. Right now, international eCommerce is the only thing driving outside capital right into the heart of this country and keeping the economy afloat.

There are reasons why small business start lending money from the banks and investors, one their reason is to fund money to finance expenses to expand their business.

Small company business loans are similar with other economical services such as restaurant financing where economical institutions offer the cash to borrower at time of emergency and charge interest rate.