What's up with the young folks?

All eyes will be on tomorrow's employment/unemployment report, for good reasons. The relative strength of the report will provide yet more essential information on the likely strength of the still young recovery. But as the expansion continues, questions about long-run trends in labor markets will increasingly dominate thinking about what the nation should expect going forward. One important element in interpreting unemployment data is the trend in labor force participation, and it appears as if there are some significant open questions about what the trend looks like. 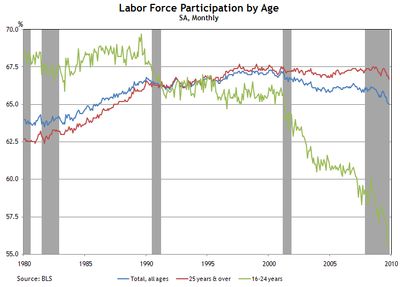 After growing during the 1980s and 1990s, the aggregate labor force participation rate (the percentage of the working-age population active in the labor market employed or looking for work) peaked in the late 1990s and is currently at levels last seen in the 1980s. But this change pales in comparison to changes in labor force participation among America's youth (those folks in the 16- to 24-year-old age range).

It also appears that the decline in youth participation is most dramatic among teenagers, and for that group it is an equally sized decline for both males and females (see the next two charts). 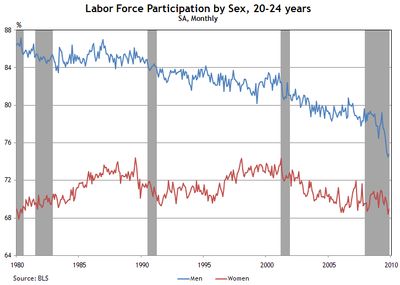 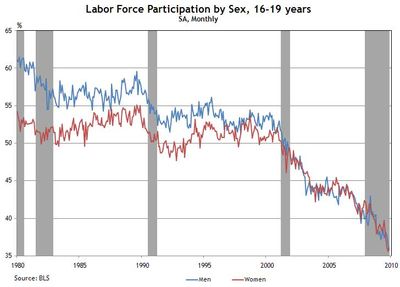 Because schooling is an important activity for young people, the changing pattern of school enrollment is an obvious potential source of change in the labor force attachment of youths. In fact, the proportion of those between 16 and 24 enrolled in school has risen from about 42 percent in the late 1980s to nearly 57 percent in 2008 (BLS, October supplement to the Current Population Survey).

There are economic returns (benefits less costs) to both labor market experience and education. The decreased attachment to the labor market of school enrollees likely reflects, at least in part, factors such as the increased lifetime economic returns to education relative to alternative uses of time. As such, a widening wage premium on education is probably an important influence on youths' schooling choices, including schooling intensity. An example would be enrolling in educational programs during the summer instead of looking for summer employment.

It would be good news if increasing long-term rewards to engaging intensively in schooling was the important factor underlying the declining labor force participation by America's youth. Some alternative explanations for the decline could be much more troubling for America's future.

By John Robertson, a vice president in the Atlanta Fed's research department

Listed below are links to blogs that reference What's up with the young folks? :

One problem is the higher minimum wage. Creates unnecessary unemployment.

The data tomorrow should be good. However, bear in mind there are YOY comparisons that factor into it-and last December was as miserable as it gets.

Data won't be real salient until after April of this year.

When I was in high school, I worked 40 hours a week evenings and weekends, mainly because I had to. But that was then.....

The cost of "working" (transportation, insurance, gas, etc) have gone up a lot more than the pay rates. And I'm not mentioning the penalty in lost study time/poorer grades, if the kid is working more than a few hours a week.

Makes no sense whatsoever to have kids work, when their take-home pay (after expenses) is about 2 bucks/hour.

Makes more sense to finish college ASAP, or go into the military.

Absurd student loans for massively inflated tuition is what's up with the young folks. Extend and pretend to the end. Their blessed college faculties could not care less, either. Another bubble courtesy of financial "innovation."

This is the biggest reason we need healthcare reform to allow older workers to leave the workforce and employment stimulus to create new work-- the kids need JOBS. Also illustrates why cutting education budgets is so stupid right now when so many kids are in school.....

We have made it more expensive to hire workers by raising the minimum wage. It should not be a shock that there are fewer of the most inexperienced workers.

I don't see an upside to the charts. The continuing decline of the employment-to-population ratio seems to be worsening. While younger workers are being hit the hardest, the labor force participation of the older workers is falling too.

It seems obvious to me... yes, some can be accounted for by higher post-secondary education attendance for 18-24 year olds.

But I can tell you the other, larger cause: we do not create enough jobs in the U.S., and have not for a long time, for the "average" person. Most people don't go to college. The average reading level in the country is 8th grade. The jobs that used to be worked by teens - bagging groceries, filling fast food orders - these jobs are held by adults now, people in their 30s through 70s. Thanks in large part to the lack of growth (or shrinkage, depending on who you listen to) in manufacturing and other similar occupations, we don't have enough work to employ these adults in what used to be a traditional occupation for a high school educated person.

If you were a fast food manager faced with a 40 year old with demonstrable experience, or a 19 year old who had never worked before - who would you hire?

How come nobody brings up the fact that this significant decrease in employment among young workers comes at the same time the minimum wage has increased from 5.15 to 7.25? These numbers make it look obvious that the artificial price floor was set above market equilibrium and has caused a significant disruption in the labor market.

The value of all this education becomes dubious when greater numbers of graduates cannot achieve enough gainful employment over time to pay back their educational debt.

Not only does this appear to be wasteful of financial resources (except for the sector who earn all that interest income on the debt.)
But ultimately, wasteful of all that very expensive education.

More college students are participating in unpaid internships than ever before. Experience is a must but corporate America dose not want to pay for it. Welcome to the 21 Century. Higher tuition, increased debt and limited opportunities to help pay you way.