« When independence begets accountability | Main | It's jobs, not discouraged workers »

The demand and supply of bank credit: A small business snapshot from the Southeast

In his recent speech, Federal Reserve Bank of Atlanta President Dennis Lockhart highlighted concerns about the linkage between commercial real estate loan problems at banks and small business financing during the economic recovery:

"The overall commercial real estate debt in the financial system is smaller than residential, but it is disproportionately concentrated in small and regional banks. Smaller banks are a significant source of credit for small businesses, and in most recoveries we look to small businesses to generate a significant number of jobs."

"A recent small business survey performed by the Atlanta Fed suggested that business loan demand was down primarily because of weak sales and modest revenue prospects. The credit availability picture was mixed. No surprise, construction-related firms and manufacturers had the most trouble obtaining credit during the last six months. But others did well in having their credit needs met. Of more than 200 respondents, nearly half did not look for credit at all, mostly citing weak sales or sufficient cash reserves."

The survey President Lockhart was referencing was conducted in early December and included responses from 206 small businesses across the Sixth Federal Reserve District (the states of Alabama, Florida, Georgia, Louisiana, Mississippi, and Tennessee) regarding their access to credit. The intent of the survey was to include some additional small business perspectives to supplement our other monetary policy information-gathering efforts.

The firms in the survey were contacts established through our Regional Economic Information Network. In that sense, the survey is not based on a pure random sample of firms. However, the industry distribution of respondent businesses was reasonably representative of the industry mix of the Sixth District (see the chart). The average firm size in the survey was about 22 employees, with around 40 percent of respondents having between one and nine employees. 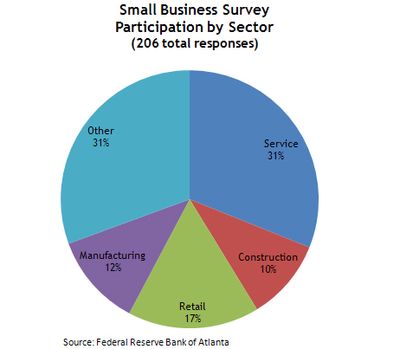 The degree of difficulty firms felt they had in obtaining credit was mixed, with about 60 percent of respondents saying they were able to obtain all or most of the bank credit they sought. The small size of the survey (206 respondents) limits the accuracy of any sector-by-sector comparisons. However, it is interesting to note that construction firms stood out as the business type that had the greatest difficulty having their demand for financing satisfied, with 70 percent of them saying they were unable to obtain the funding they sought. That percentage compares with 50 percent of small manufacturers surveyed and 25 percent of retailers responding they were unable to obtain the funding they desired.

Of those businesses that had not sought credit during the last six months, the dominant reason given was poor sales/revenue (cited by 55 percent of those respondents). Other reasons for not seeking additional credit included sufficient cash reserves.

For respondents who were not expecting to seek credit over the next six months, the anticipation of poor sales growth was the most frequently cited reason (cited by 49 percent of those respondents).

There are plenty of caveats that should be applied to these results. For example, the survey respondents represent established, relatively successful firms. We could not, with this effort, capture the experience of firms that have recently failed (perhaps for lack of credit). Nor can we ascertain the businesses that were never formed because they could not obtain start-up funding.

Still, we believe the results of our survey are instructive. To the extent that the firms in our survey are representative, it appears most going concerns have been able to obtain all or most of the credit they need. What they don't have are customers.

Of course, this is a snapshot of current conditions, and things may change as the economy picks up, demand expands, and credit needs grow. And it would be very useful to know what the story is with those firms that have failed or were never created. We are consequently planning to conduct a follow-up survey as 2010 progresses. We'll keep you posted.

Listed below are links to blogs that reference The demand and supply of bank credit: A small business snapshot from the Southeast :

thanks for the information...although i live and work in canada i truly appreciate the american perspective. we seem to follow the lead of our largest trading partner...the US!!

Great article and information here!Bank credit is very important when trying to start a business, but not every small business can qualify for a bank loan, especially today. There are other options, one being a business cash advance. It’s cash given up front to businesses when they need it. Depending on how much monthly revenue the business brings in, they don’t have to make monthly payments like with small business loans; instead small debits are automatically taken from batched credit card sales which makes repaying the money much easier.

I don't think the large banks understand small businesses. They tend to be interested in large businesses and consumer debt, particularly credit cards. I really don't see this changing when you see the spread for credit card lending vs. small business loans even considering risk.

In my opinion ,small businesses are finding it quite difficult to get approve for a small business loan. Banks and small financial institutions are not taking into consideration the fact that business owners need the working capital to expand their business and create more jobs.

I believe that as business lending becomes harder for the majority, it is the determination of the individual that will enable them to aquire the neccesarry funds. Thinking outside the box and pulling from resources which they either didn't know were available, or didn't think they had access to.
Funding sources such as venture capitalists provide great benefits and a 'win win' situation for both parties as the business owner offers some of the cream of their crop, in return for a generous return on the venture capitalists investment.
Gives weight to the old saying 'where there's a will there's a way'.
Great overview of what is actually happening in the indstry though.

the fact that business owners need the working capital to expand their business and create more jobs,even small business it wont be hard for them anymore to make a loan.

Living in the UK it is interesting to see a perspective from across the water. Our economy lags the US and it is noteworthy to read of the attitudes of the main lenders towards business loans.

Construction businesses have been hit hard in the UK too and the reluctance of banks to lend to such businesses is partly due to the property bubble that has well and truly burst and the obvious need for many construction loans to be substantial in nature.

I can but hope that business loans become more available in the near future as many small businesses in the UK are finding credit hard to come by.

Based on how much per month income the business delivers in, they do not have to make per month installments like with little business loans; instead little debits are instantly taken from batched bank card sales which makes paying the money much easier.