« Economic troughs, changes in the unemployment rate, and fed policy | Main | Reviewing the recession: Was monetary policy to blame? »

In a speech yesterday, William Dudley, the president of the Federal Reserve Bank of New York, identified financial constraints for small businesses as a restraint on the pace of economic recovery. Specifically, he said:

"For small business borrowers, there are three problems. First, the fundamentals of their businesses have often deteriorated because of the length and severity of the recession—making many less creditworthy. Second, some sources of funding for small businesses—credit card borrowing and home equity loans—have dried up as banks have responded to rising credit losses in these areas by tightening credit standards. Third, small businesses have few alternative sources of funds. They are too small to borrow in the capital markets and the Small Business Administration programs are not large enough to accommodate more than a small fraction of the demand from this sector."

President Dudley's comments are even more relevant in the current recession if one considers the disproportionate effect the recession has had on very small businesses. In general, the Small Business Administration defines a small business as a firm with less than 500 employees. However, for my analysis here I focus on the very small firms (those with less than 50 employees) as the data indicate these firms have been the most affected by the current recession. (Look here for another take on how to define a small business). 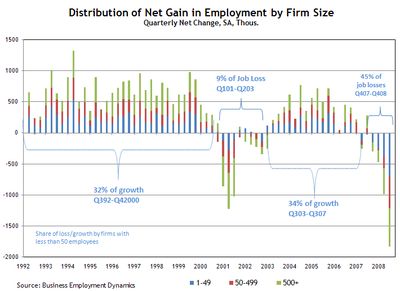 During periods when national employment levels were expanding since 1992 (when this data series began), firms with less than 50 employees have made up approximately one-third of the nation's employment growth. During the employment declines associated with the 2001 recession, these firms made up only 9 percent of job losses. In the current recession, though, these very small firms have made up 45 percent of the nation's job losses.

Looking ahead, it's not clear whether small businesses will continue to play their traditional role in hiring staff and helping to fuel an employment recovery. However, if the above-mentioned financial constraints are a major contributor to the disproportionately large employment contractions for very small firms, then the post-recession employment boost these firms typically provide may be less robust than in previous recoveries.

Listed below are links to blogs that reference Prospects for a small business-fueled employment recovery :

» Is Small Business at a Crossroads from Leading Questions
In my browsing this morning, I came across this article from the Federal Reserve Bank of Atlanta - Prospects for a small business-fueled employment recovery. Here is a quote from a speech given by William Dudley of the Federal Reserve... [Read More]

“Severity of the recession, credit card borrowing and home equity loans; and few alternative sources of funds” I agree with what Dudley said because I think that small business find it hard to operate their business because of this constraints. In our bba syllabus, recession affects the business a little but the longer it the recovery period, the recovery also took a long turn. Another is that, it is not recommended for small business to use credit cards to pay their bills, as it would be much better to use cash as some accidentally use the money to pay our use to pay their activities, forgetting that they still have obligations to see.

he is correct in putting deterioration of fundamentals at the top.

Banks will want to have the most readily (cheaply) securitizable loans on their books. That means rated firms with publicly available books - publicly listed firms come before mom and pop firms, great lens will credit this and save.

Small business only pays taxes on profits but regulatory costs are incurred before any profits are had...

Small business only pays taxes on profits but regulatory costs are incurred before any profits are had.