« Private sector forecasts at variance | Main | Markets work, even when they don’t »

Since the beginning of this year, the effective funds rate in the market for reserve balances has varied between zero and about 15 basis points below the interest rate the Federal Reserve pays on those reserve balances (see chart below, which runs through July 2). A vexing issue has been the fact that the interest paid on reserve balances at the Fed has not set a floor on the funds rate traded in the funds market, but rather it has acted more like a magnet (see, for example, this PrefBlog post from early this year). 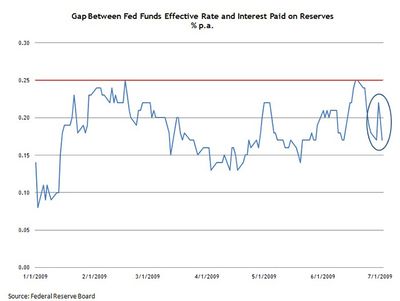 On July 2, the Federal Reserve Board’s latest amendments to Regulation D (Reserve Requirement of Depository Institutions) went into effect. Included in these changes are two that could materially affect the fed funds market and that vexing gap between the fed funds market rate and the deposit rate.

The first is the authorization for correspondent banks to create Excess Balance Account (EBA) programs on behalf of their respondent financial institution clients. The second is the nullification of an exemption that allowed ineligible institutions (such as the Federal Home Loan Banks) to earn interest on their reserve balances as a result of providing reserve management services for banks.

This change is good news for the 20 or so bankers' banks that provide respondent banks, usually community banks, with services, such as managing the respondent’s reserve balances at the Fed. Prior to the change in Regulation D, a bankers' bank was required to pool all the respondent’s reserve deposits into its own reserve account. This task is a bit of a problem when excess reserves are at high levels because reserves are a bank asset that counts against regulatory capital-to-asset ratios. Partly because of this financial leverage concern, bankers’ banks have had to sell some of their respondent excess reserves into the fed funds market and earn less than the 25 basis points offered for reserve balances at the Fed. But with the change in Reg. D, they will be able to deposit respondent balances at the Fed in the EBAs, and this approach will alleviate their balance sheet pressure.

What does this change mean for the funds market? Well, one source of supply of funds will be reduced, and that should put upward pressure on the fed funds rate. That’s good news for closing the deposit/market rate spread, although it should be said that bankers’ banks represent only a small fraction (about 5 percent) of daily fed funds market activity, so the impact will probably be equally small.

Will this change matter to them? A look at the FHLB consolidated balance sheet suggests it could. For instance, as of Sept. 30, 2008, the FHLBs were sellers of some $94 billion of fed funds and held zero on deposit at the Fed. But as of Dec. 31, 2008, after the Fed started paying interest on reserves, the FHLBs sold only $40 billion of fed funds and held $47 billion on deposit at the Fed. In a funds market that has been experiencing relatively light volumes in 2009 year to date, the potential additional supply of dollar reserves by the FHLBs could materially affect rates in the fed funds market.

What happened when the regulation changes took effect yesterday? Well, the fed funds effective rate yesterday declined from 20 to 17 basis points. Thus, it appears the softer funding conditions expected as a result of the changes generally failed to materialize. But it still may be too early to determine the full impact of the regulation changes, and more definitive changes in trading could materialize in coming days. Fed funds market nerds stay tuned.

By John Robertson, vice president in research at the Atlanta Fed

Listed below are links to blogs that reference A funny thing happened on the way to the federal funds market :

Why have a peer-to-peer inter-bank market at all? Why not redesign the system using a hub-and-spoke model with the Fed being intermediary to overnight unsecured lending. The whole reserve ratio requirement is obsolete in the current system.

Zaid is exactly right. Pass-thru's should be eliminated.