« Debt and money | Main | Price stability and the monetary base »

Are there green shoots in the labor market?

In the first part of 2009, the labor market continued its general weakness, which carried over from 2008. However, the April and May employment data introduced some movements in a seemingly positive direction—green shoots, perhaps?

For the most part, the moderation was widespread across industries, as shown in the employment diffusion index, which increased from 25.8 percent in April to 32.7 percent in May. In addition, temporary help services, which has historically been thought of as a leading labor market indicator, experienced a relatively small number of job losses (–7,000) compared to the average of 73,000 losses per month over the last six months. Construction employment losses also moderated in May while manufacturing losses held steady at just over 150,000. 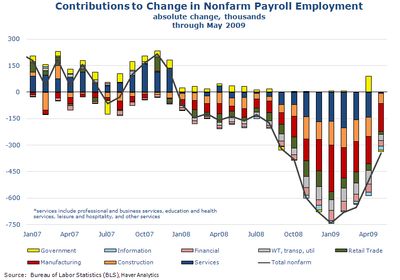 Another piece of somewhat encouraging news came from the initial claims data. Initial claims (four-week moving average) began a downward trend on April 11. The number of initial claims has declined for three consecutive weeks since the week ending May 9, although the levels are still slightly up compared to the May 2 levels.

A decline in initial claims has occurred at the end of the last five recessions so it would seem that this development is a positive signal. Historically, declines in initial claims at the end of prior recessions have also been accompanied by declines in continuing claims, which we saw for the first time in the week of May 23, when the number of continuing claims decreased by 15,000 relative to the preceding week. The four-week moving average for continuing claims continued to increase as the level for the week ending May 23 is still the second-highest level ever reported.

The unemployment rate, however, is still on the rise, increasing from 8.9 percent in April to 9.4 percent in May. This uptick is primarily related to an increase in the number of people losing jobs and persons who completed temporary jobs. Also, labor force participation increased, which works to drive up the unemployment rate, though the increase was slight, from 65.8 percent to 65.9 percent. In addition, after a dip in April, the number of workers that are part-time for economic reasons increased slightly in May. 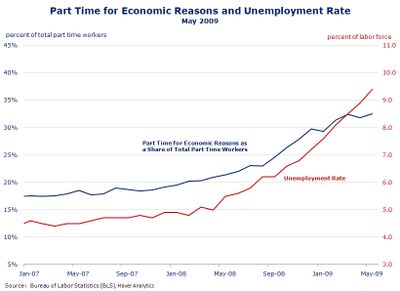 The slight gain seen in April in average weekly hours for manufacturing workers was erased this month, although hours of overtime maintained April's slight increase. 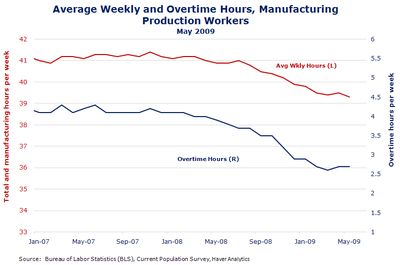 We also have seen some better news in the Atlanta Fed's Sixth Federal Reserve District. Initial claims have decelerated at a faster rate in the Sixth District than in the nation, most notably in Georgia, Alabama, and Florida. Additionally, in contrast with the national level, where continuing claims have had a persistent rise until this past release, the rate of increase has slowed down in District states. 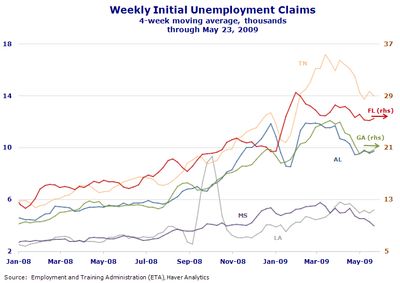 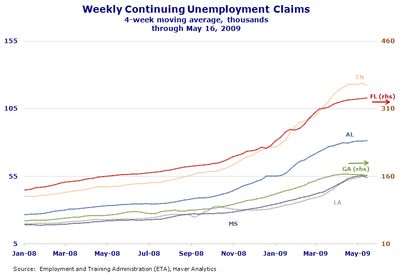 Also, Florida, which was one of the first states to suffer in the current recession and one of the hardest hit by the housing downturn, posted job gains in April for the first time in more than two years. A large share of these gains came from the employment services industry, which includes the temporary employment sector. Florida's numbers are slightly more positive than the industry's national data.

So are these recent improvements in some of the employment data really green shoots, or are they just weeds? Only time will tell, but it is promising that the labor market is at least producing some variation from the negative trends.

Listed below are links to blogs that reference Are there green shoots in the labor market? :