« Funds Rate Probabilities: Waiting For Another 50 | Main | The Service Sector Stages A Comeback »

One of my New year's resolutions is to work through some the random bits of things I have been meaning to blog on about, stored in my ever-useful copy of EverNote.  So far I am making about as much progress on that as on my promise to eat less ice cream.

Oh, well.  Baby steps.  One piece of old business comes from Don Boudreaux's campaign last month to undermine the view that current account deficits imply indebtedness.  If I might paraphrase, Don's argument -- which you can find here, here, and here -- is essentially that that trade deficits represent an act of deferred consumption -- and hence investment -- by someone in the world. This is crystal clear when the funds made available by countries with trade surpluses are used to purchase plants, properties, or significant equity claims outside of their own border -- an activity known as foreign direct investment.

Here's a picture you have probably seen before:

Here's a picture you may not have seen, from Sun Bin: 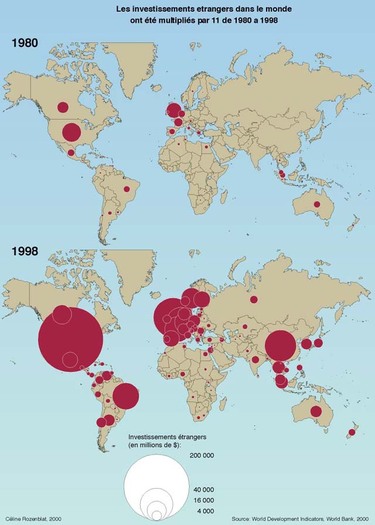 Since about 1980 the United States has, for all practical purposes, run permanent trade deficits.  It has also been a magnet for direct investment.  And though some of the income from that direct investment is repatriated to other countries, I think you would be hard pressed to argue that the situation shown above represents a loss to Americans.

Listed below are links to blogs that reference Trade And Debt :

Power to the keyboard, Right oN!

Power to the keyboard, Right On!

Everybody has to send their money here because, well, they have no choice: the US is just the greatest nation on earth.

But to look at it through another lens, if I'm the US and you're sources of capital, currently:

You throw money at me because if you don't I won't buy your stuff, because after all I don't have a real job myself. Also because if you don't throw money at me, I'll go broke and then _nobody_ will buy your stuff, because I'm the only one stupid enough to keep spending ever-increasing amounts of money I don't have. But to me it's all ok; I think I'm so great you'll keep sending me money forever.

What the Bernanke/O'Reilly/Altig argument seems to conveniently ignore is that these inflows aren't gifts, they're investment that needs to be repaid by our children, by one or more of the following: higher taxes, lower spending power per a falling dollar, and perhaps more than anything, a lower standard of living in the form of opportunity cost if inflow goes to consumption and not productive investment.

I genuinely wonder how some of these people can look their children in the eye.

what do labor force participation rates look like these days?

Nice summary of Don's argument but I have the following problem with it. Suppose that I borrow $1 million to open pizza parlors in Los Angeles. I did invest but I still owe the bank $1 million. Of course - as James Hamilton often reminds us - the U.S. is saving LESS not more.

Brad Setser recently posted an interesting paper with "Dark Matter" being part of the title. The upshot is that when one sees the fact that the U.S. has positive net income from abroad even today, one has to ask whether the MARKET value of US investments abroad so greatly exceedks the BOOK value that our investments abroad might actually be worth more than the recorded $12.5 trillion in US obligations to the rest of the world.

As I note over at Angrybear, it's an interesting claim, but then we have been offering transfer pricing manipulation as an alternative explanation as to why recorded net income from abroad is still positive for the U.S.

There are many things I am willing to give up, but Blue Bell ice cream is not on the list.

Moderation perhaps, but that's about it.

And pass the chocolate syrup.

Unless "COMPNENTS" is something new, you've made a common blogger mistake - you typed in the title to the chart, looked at it quickly one time, then never looked at it again.

Happens to me all the time.

I hold that the Asian mercantilist manipulation of exchange rates that underpins the trade and current account deficits is simply a variant of the "vendor financing" fraud that fueled the telecomm bubble.

Just as the managments of Nortel and Lucent deceived their stockholders into thinking that business was great by lending customers the money to buy their products, though those customers had no real prospect of ever being able to repay the loans, so do the governing and managing classes of the Asian countries do essentially the same thing to deceive their citizens into thinking that export manufacturing is a great business.

In the cases of Nortel and Lucent, there were outside agencies in a position to expose the fraud and call management to account. In the case of the Asian export economies, there is not. These unsustainable trade imbalances will continue until they have so distorted the world economy that some constraint makes it simply impossible for them to go on. Put differently, straw will continue to be piled onto the camel until its back breaks.

RN: "What the Bernanke/O'Reilly/Altig argument seems to conveniently ignore is that these inflows aren't gifts, they're investment that needs to be repaid by our children." If the issue is foreign direct investment, then the returns to that investment is what pays for the trade surplus today. And it is still a winning proposition for domestic households because more capital makes our labor more productive, independent of who owns it. I think what what you are worried about is the case where the extra resources we are belssed with from abroad are consumed away. Although I still think there is some room for discussion about how muh we should worry about this, it is fair to propose that this may represent passing a burden on to future generations.

pgl -- Right, as always. Investing with borrowed funds generates its own income to finance the loan, of course, so that does not worry me. I found the dark matter discussion quite interesting. Maybe some day I'll have something intelligent to add.

jm -- As I said above, I don't want to push the story to the point of claiming that trade deficits should be unquestionably accepted as a positive development. However, the trend for the current account deficit since the beginning of the 1980s is definitely toward deficit, and it has been associated with a lot of investment in the US. That, to me, suggests Don's point was worth taking note of.

Tim -- Yes, my RAs were mortified by sloppiness as well.

MG -- God bless Vince Young! (Both for beating USC and for deciding to be absent when Texas plays the Buckeyes next fall.)

I am extremely skeptical that much of the inflow is foreign direct investment.

I read and speak Japanese fluently, was associated with the country in various trade-related areas until about five years ago, and live in the area near O'Hare Airport where many Japanese companies have US offices. The Japanese presence in this area is dramatically less than it was ten years ago. The clientele of my favorite Japanese restaurant, which used to be mainly Japanese, is now almost entirely American.

And I read the Japanese business and economics press fairly regularly, and have seen nothing about any boom in FDI to the US.

Japanese FDI, at least, is going to China, not the US.